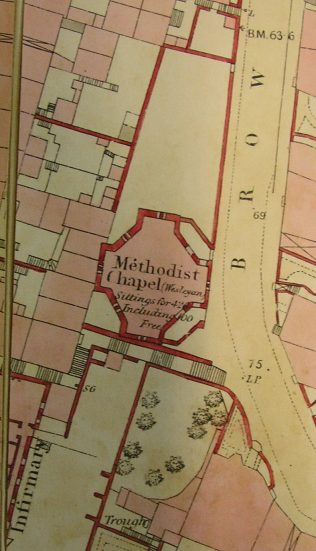 Brow Street WM Chapel was built of brick and stone in 1864 at a cost of £1530. The site measured 26 yards on the Brow Street frontage and 18 yards deep at one end and 13 yards deep at the other. The land fell away steeply from Brow Street and the  chapel was built on two levels. The Sunday School was built in the lower level below the street. The chapel above it was entered at street level. The building had the shape of a squashed octagon. The chapel was 51 feet by 36 feet. It was entered from Brow Street by two doorways between which was the vestry. The doorways led to vestibules in which there were stairs to the gallery and entrances to the lower floor of the chapel. Inside the chapel the pulpit backed on to the vestry and in front of it was dais extending into the middle of the space. Pews were arranged around it in four blocks. In the gallery the pews were arranged in much the same way and there was an organ above the vestry. Outside the chapel, on the south side there were steps leading downwards to the entrance to the schoolroom which corresponded in plan broadly with the chapel above. The school portion of the building was of stone, the chapel of brick. The identity of the designer is unknown. Major improvements were undertaken in 1897. The chapel ceiling, roof and windows were replaced, an organ costing £280 and donated by John and B Williamson was installed and additional Sunday School accommodation was provided on land to the north of the existing building. This consisted of one schoolroom, 24 feet by 20 feet,  with boiler house attached and another 18 feet by 20 feet. Between them was an entrance lobby and a toilet. At the far end of the block was a kitchen, 16 feet by 9 feet.

When the chapel was built there were 76 members and 140 hearers. In 1873 the seating capacity was said to be 400. This had fallen to 376 by 1940 when there were three schoolrooms and one other room. It was closed by when St Mark’s, Kirby Street opened in 1973. It was later demolished and the site remains vacant.

Cumbria Archive Service, Carlisle, DFCM2/33 Plans of the buildings in 1954