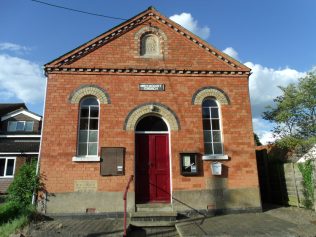 Yelden, (sometimes spelt Yielden) is a small village in north Bedfordshire by the Northamptonshire border.

Wm. Wyldes of Yielden gifted land in Spring Lane on 20 July 1840 for the purpose of building a Wesleyan Chapel.

The 1851 Religious Census return for Yielden Wesleyan Methodist Chapel made by Saml H. Wardley, Superintendent Minister, Higham Ferrers. He notes that the building had 50 Free sittings and 45 Other. The congregations that day, 30 March were:

Registration for worship took place on 29 May 1854 and was made by Thomas Jeffery of Higham Ferrers (Northants), Wesleyan Minister.  The Returns of accommodation In Wesleyan Methodist Chapels recorded that in the Higham Ferrers Circuit, Yelden had 82 sittings in 1873.

A new chapel was built on the same site as its predecessor. The headstone indicates that the architect was John Blunt and the foundation stone was laid on 11 August 1884. Registration for worship in the new chapel was made by Jabez Wildes of Yelden (trustee) on 8 October 1884.

More information about Yelden chapel with photos, particularly of the interior and memorials can be found on the Rushden Research Group website. The Yelden Methodist Chapel is in 2014 part of Nene Valley Methodist Circuit.