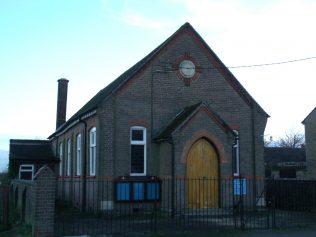 The 1851 Religious Census includes a return for Sundon Wesleyan Methodist Chapel made by Samuel Hopkins, Manager. The return states that the chapel had been built in 1839 and contained 100 Free Sittings, 100 other and 50 Standing. The entry noted that ‘The Schoolhouse opens onto the Chapel by sliding doors’. Attendances on Census day, 30 March were:

Registration for Worship at Sundon was made by Matthew Trevan Male of Dunstable, Superintendent Minister on 9 February 1854.

When this building was declared ‘unfit for holding Divine Service’, services were held in the village school whilst a new chapel was built. This new Chapel cost £525 and was opened on 5 August 1913 when ‘beautiful weather favoured the celebration of the event’.

The Chapel at Sundon closed for worship in 2013.