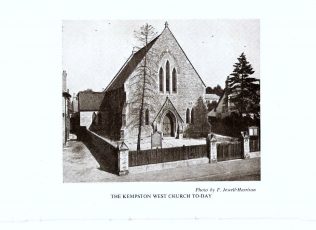 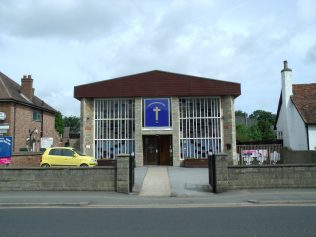 The first Wesleyan Methodist chapel in Kempston was opened in Bell End in 1839. As the population of Kempston grew, the Bell End chapel became inadequate, Consequently, the Bedford Circuit Quarterly Meeting in March 1858 agreed ‘a New Chapel erected at a cost not exceeding £650, the debt not to exceed £50.’

Located in the High Street the new chapel was more prominently located than its predecessor and opened on 22 April 1860. The opening services were conducted by Rev Alfred Barrett, Governor of Richmond College and brother in law of two of new chapel’s Trustees, the industrialists James and Frederick Howard.

The Chapel at Kempston West was registered for worship on 30 January 1861 by Charles Carter, Harpur Street, Bedford, minister and for marriages on 18 March 1890. The Returns of accommodation In Wesleyan Methodist Chapels recorded that Kempston West had 304 sittings in 1873. When in 1875, the Bedford Circuit was divided, Kempston was a founder member of the Bedford St Mary’s Circuit.

FW Brittain recalled in the 1950s that when he first attended Sunday School at Kempston West the Superintendent was William Ames. Although Mr Brittain remembered Mr Ames as lovable and popular, he also carried a green rod with which to ensure the scholars remained attentive during services.

The chapel was improved and maintained. A harmonium was replaced in 1877 with an organ, whilst in 1882 repairs were made to the roof, paint the spouting and door varnishing for the cost of £20.

Kempston continued to grow substantially towards Bedford and consequentially the Kempston Wesleyan Methodist Chapel was supplemented with building in 1904 of an additional chapel, Kempston East.

Kempston West has received developments in the 1950s and 1960s through to today. In 2014, its members loyally continue in their Christian service.