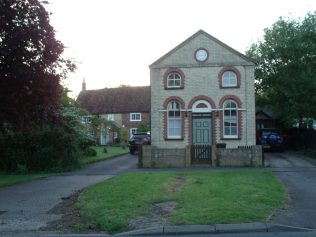 In a picturesque setting overlooking the village green, Eggington Wesleyan Methodist Chapel is a small, compact and attractive building. The village is about 2.5 miles from Leighton Buzzard.

The 1851 Religious Census return was made on Sunday 30 March. A return for Eggington was made by James Sanders, Leader. This stated that the building had been erected in 1845 and had 70 Free Sittings and 30 Other. There was no Sunday School, but the General Congregation had been 29 in the afternoon and 77 in the evening.

The building was registered for worship on 19 April 1861, by Joshua Mottram of Leighton Buzzard, minister. An inscription above the door notes that the building was extended in 1867. Guinevere E Calder states that a Sunday school was started towards the end of the 19th Century by John Lathwell and George Brown, the first scholars being their sons William and Bert. ‘Mr Brown trained the scholars and the choir for the Easter Anniversary services’. ‘On the bank holiday Monday the Sunday School children had their annual treat which usually took the form of a tea party and was eagerly looked forward to each year.’