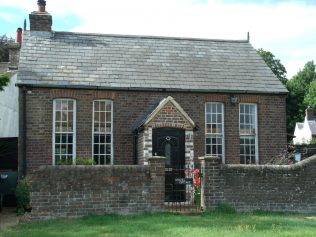 The name of Whipsnade is widely known because of the famous zoo. However, on one side of the large green in this Chilterns village is the former WM chapel.

A registration for worship was made on 19 May 1835 in the ‘Dwelling house of John Searle’ by Thomas Rogerson of Luton. Edwin Welch in Bedfordshire Chapels and Meeting Houses: Official Registration 1672-1901 states that ‘Rogerson registered Wesleyan chapels at Barton, Houghton Regis, Leagrave, Luton, Tebworth and Toddington on the same day, so this was probably Wesleyan too’. Whipsnade having been part of Luton WM Circuit became a founder member of the Dunstable Circuit in 1843.

The 1851 Religious Census includes a return for Whipsnade Wesleyan Methodist Chapel made by Thomas Gadsden, Steward meeting in Whipsnade Hall. The return has 50 Free Sittings and additional space for about 188. Attendances were:

However, the Edmund K Blyth who started the Whipsnade tree cathedral purchased the former chapel in 1947 and it was re-dedicated with services being held fortnightly from 1948 until they ceased again in 1964.