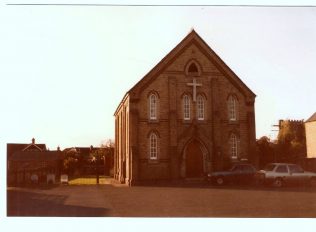 The central Bedfordshire village of Houghton Conquest is situated south of Bedford and just to the north of Ampthill. On the Ampthill side on top of the Greensand ridge overlooking Houghton Conquest is ruined Houghton House inspiration for John Bunyan as his House Beautiful in Pilgrim’s Progress.

The first Methodist registration for worship in Houghton Conquest was a Methodist Chapel, property of John Armstrong. This was registered on 18 July/18 October 1805 by John Armstrong, William Baker and James Kent. The Armstrong family were involved in several Methodist Chapels across central Bedfordshire. Another registration for worship in a Wesleyan Chapel  was  made on 28/30 March 1834 by Isaac Wale, trustee.  This registration would relate to the Wesley Methodist Chapel erected 1832 listed in the  1851 Ecclesiastical Census. The return was made by Thomas Bunker, Trustee. He noted that there were 120 Free and 70 Other sittings. Attendances were:

The 1832 Chapel was situated in Rectory Lane, Houghton Conquest. The chapel then part of the Bedfordshire Circuit was re-registered for worship by William Henry Clarkson, 4 Harpur St Bedford, superintendent minister on 17 February 1854. Members of the Chapel proved active workers. For example, The Bedfordshire Times and Independent 11 October 1859 noted that a Missionary meeting had been held at Houghton Conquest. The paper recorded ‘One incident in connection with this meeting’; Mr Jeffs and family, bakers of Houghton produced a missionary box with the noble sum of £7 7s. 6d., the result of their own industry during the past year. Such a sum as this realized by a family in no better circumstances in life than ourselves ought to excite us to work in this great and wide field of missionary labour, and ever to keep a missionary box close at hand’.

Houghton Conquest became a founding church in the Ampthill Wesleyan Circuit when it was formed in 1875. Then in 1878 a new chapel was built in front of the 1832 chapel which then became the Sunday school room. This chapel was registered for worship on 30 October 1878 by Rev George Bellamy, Woburn Street, Ampthill Wesleyan Minister.

For many years activities such as the Wesley Guild flourished at Houghton Conquest. In 1949 the Chapel was re-opened after renovation and maintained in good condition until its closure. Photographs of the renovated interior and ceremony can be seen on the Ampthill Images website. The photograph taken in the mid-1980s shows the 1878 chapel with graveyard on the left.