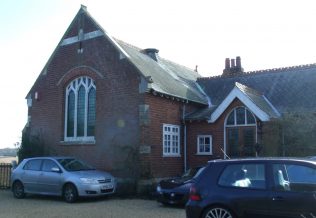 The 1851 Religious Census includes a return for Steppingley Wesleyan Methodist Chapel made by Walter Coates, Minister. The return states that the chapel was erected in 1847 and contained 45 Free Sittings, 40 other and 15 standing. Attendances on Census day, 30 March were:

This chapel was in a row of old cottages opposite Steppingley Parish church. Registration for worship was made on 5 February 1861 by Charles Carter, Harpur Street, Bedford, minister. In his book, Steppingley Remembered, Horace Farmer records that the chapel was ‘greatly supported by the Teasdale family who lived at Townsend Farm.’

A new chapel (pictured) was built in 1903 on land donated by the Duke of Bedford. Registration for worship was made on 29 February 1903 and for marriages on 25 March 1905

Efforts were made to mission to the village including in 1932 an evangelistic campaign conducted by JH Haile.