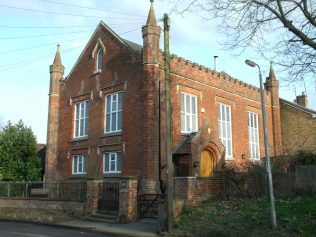 Situated on the east side of the A5, Tebworth is a hamlet in the parish of Chalgrave.

In 1838 a Wesleyan Day School was built that also housed the Sunday School. Four years later on the main road through the village a new chapel was built in front of the Wesleyan Day School. The new chapel was dedicated for worship on 16 November 1842 when the preacher was Rev Dr Beaumont of Liverpool. A programme for the occasion describes an ‘Old dilapidated Chapel’ whilst the new chapel is ‘an Elegant but Plain, Substantial and Commodious Building in the Gothic style of Architecture an edifice somewhat worth of the Noble Object to which it is about to be consecrated.’ It also reminded people of the sacrifices the members had made in order for the building to be made. The new chapel was registered for worship on 4/5 May 1846 by Wright Shovelton of Dunstable and again by Matthew Trevan Male of Dunstable, Superintendent Minister on 9 February 1854.

The chapel’s return for the 1851 Ecclesiastical return was made by David Roberts, Trustee and Steward. He stated there were 100 Free and 100 Other sittings. The attendance on Census day, 30 March were: Morning – 63; Afternoon – 200 and Evening – 150. The average congregation was 150 in the morning plus 77 Sunday scholars.

Tebworth’s distinctive chapel was listed a Grade II building in 1980. When the membership dwindled, the chapel was closed in 1989, the last service being held on 5 October.