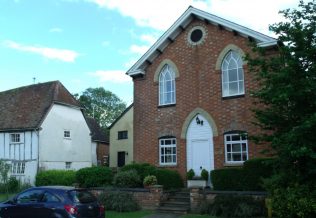 Until the late 19th century, Swineshead was a detached parish in Huntingdonshire when it transferred to Bedfordshire which had previously surrounded it.

The 1851 Ecclesiastical census states that a Wesleyan Methodist chapel had been built in 1851 having 50 Free Sitting and 30 other. The attendance on that Sunday, 31 March was :

This church was registered for worship on 3 March 1861 by Charles Edward Woolmer of Higham Ferrers (Northants), minister. Reference is made in the Rushden Research Group: A Wesleyan Methodist History by Stephen Michell, Article No 19 Higham Ferrers Circuit – Swineshead to this chapel having a gallery and a thatch roof.

From 1814 to 1828, Swineshead was part of Wellingborough Circuit when it joined Higham Ferrers. A new church was built in 1864 and registered for worship on 27 September 1865 by Josiah Jutsum of High Ferrers (Northants) Wesleyan minister. The Rushden Research Group article gives an evocative picture of chapel life in Swineshead.

Swineshead chapel closed in 1969 and the registration cancelled on 6 August 1970.