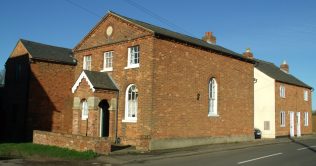 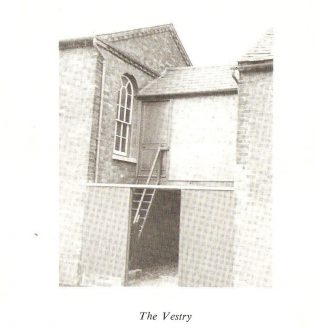 Cardington Wesleyan Methodist chapel was built in 1823 at the instigation of Susanna Row and her brother Thomas. In A Cloud of Witness, Cardington Methodist Chapel 1823-1973, Norah Addington recounts the story that one evening Thomas was followed by a Newfoundland dog. The next day Thomas heard that a reward was offered for the return of the dog. Returning the dog, Thomas persuaded the own to put the reward fee at the top of a subscription list of donations towards building the chapel. This persuaded other people to join the subscription list.

The ‘Newly erected Methodist Chapel’ was registered for worship by John H Rowe, minister on 7 Feb/7 Apr 1824. It was re-registered for worship on 9 February 1854 by William Henry Clarkson, Harpur St, Bedford, superintendent minister. Registration for Marriages was made on 11 January 1898.

The chapel was lit by oil lamps and heated by a coke stove, the piping of which went through the gallery wall. Norah Addington noted that ‘this meant the preacher was cold even if his congregation was warm!!’

An unusual feature of Cardington chapel was that not only was the pulpit only big enough for the preacher, but it was entered from a vestry built as illustrated between the chapel and chapel keeper’s cottage and was entered by an outside staircase from a stable for the preacher’s horse.

The 1851 Religious Census includes a return for Cardington Wesleyan Methodist Chapel made by Susanna Row, Manager. The return states that the chapel had been erected in 1823 and contained 90 Free Sittings, and 58 other. Attendances on Census day, 30 March were:

The pulpit was replaced by a rostrum. Electricity was installed in 1931.

The Chapel had a flourishing Sunday School for many years and a Band of Hope.

In 1930, one member of Cardington Wesleyan Chapel, Samuel Church died in the R.101 airship disaster attempting to rescue two of his mates.