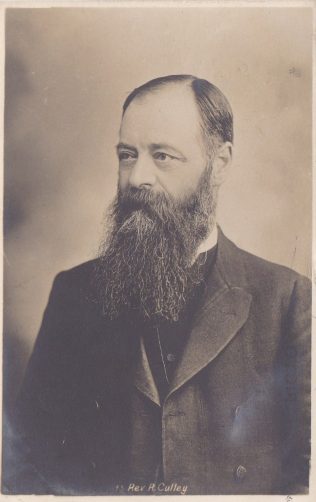 I was recently sent the attached photo by a family member. It was a postcard found in an on-line sale, sent in November1908 from Cliff College in Calver. The student’s name is illegible but the recipient was Aldyth Margetts then aged 25 of Princes Risborough. The number 33 may suggest there are other related photos in the same series. Robert Culley was my distant cousin. He was born in 1846 at Skeyton in Norfolk. His family were husbandmen from Suffield but Robert spent his early years at Felmingham in the same county. His obituary states his parents were devoted Methodists, supporters of their village chapel.

Robert was accepted as a candidate for the ministry aged 19 in 1865 and after training spent 21 years in circuit life. In 1889 he was appointed secretary of the Sunday School Union and in 1907 was appointed Book Steward taking an active interest in the Publishing House. His name appears as publisher in many tracts and books. In later life he was resident with his wife and three children at “Keswick” on  Southside, Clapham Common. His eldest son Robert John predeceased him aged 24 in 1899. Robert died in February 1910.

There are miscellaneous references to his presence as minister in various parts of the country.

It may be of interest that Robert’s uncle, John Culley, bailiff for the Earl of Orford (Lord Walpole) at Burnham, has an obituary in The Primitive Methodist dated 1869 which you can find on-line. The year after he died, his son John addressed a Temperance meeting in the Primitive Methodist chapel at East Rudham and in 1871 married West Rudham’s innkeeper’s daughter.  A third John Culley, lay preacher on the Dereham circuit and also a farm bailiff for a time, is not connected. It appears his family name was corrupted from Cullen mid 19C. Other members of the family may have been active but no record has come my way as yet.

My  great x2 grandfather was baptised at Sprowston parish but his several siblings are without a parish baptism. I suspect they may have been baptised by an itinerant preacher. If anyone would care to comment on this practice I would be most interested for I fear some of his generation may have disappeared without trace.