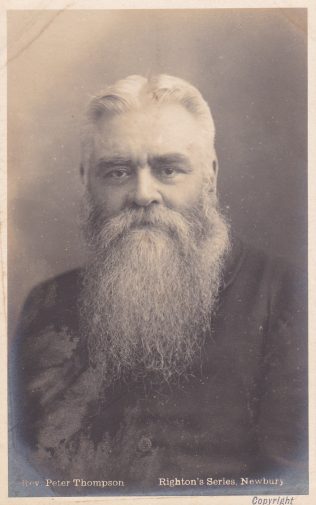 Peter Thompson was a ‘gentle giant’ who, despite being a talented academic, spent most of his ministry at the East London Mission.

The second son of a Lancashire farmer, Peter grew up in a tee-total Methodist household with a rather austere father and a saintly mother.

He trained at Didsbury Wesleyan College where he was, by all accounts, a brilliant student.

He was stationed in Ulverston and then Huddersfield (by 1876). By 1881 Peter had married and was Minister at Wood Green. He and his wife, Mary, do not appear to have had any children. They spent some years in Redhill and then,following the decision of Conference in 1885 to establish the London Wesleyan Methodist Mission, Peter was sent to the East End of London to take charge of the almost defunct St George’s Wesleyan Chapel. His work as a slum missionary was so successful that soon larger premises were required. In addition the mission took over a ‘most undesirable’ public house (The White Swan on Ratcliffe Highway) and later, in 1891, the Mahogany Bar (see http://www.mymethodisthistory.org.uk/place-2/the-mahogany-bar-mission). In 1898 he was interviewed by Charles Booth as part of Booth’s famous survey of London. Further information about the area and Peter’s work there can be found by following the link to the excellent website of St George-in-the-East Church below.

Peter died after a long illness in 1909 having served 24 years in East London, one of the best known and loved Wesleyan ministers of his time.