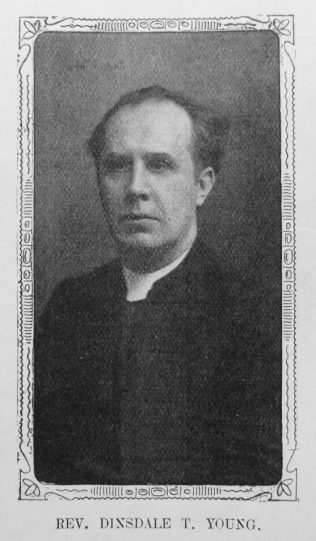 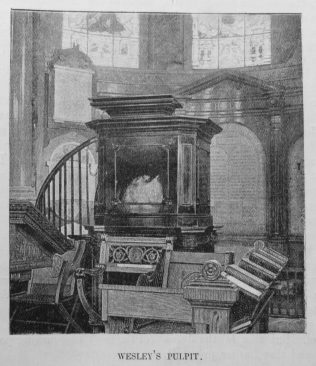 A Sunday Evening at Wesley’s Chapel

Transcription of Article published in the Primitive Methodist Magazine by A.R.O.I.

THE fact that the Conference is to be a held in Wesley’s Chapel, City Road, led to my making a journey thither one Sunday evening. I had read so much of the successful ministry of Rev. Dinsdale T. Young, in Edinburgh and London, that I was anxious to hear him. The famous chapel in City Road is very accessible from north London. Half an hour brought me to the door and I was glad to find that Old Street Tube station is within a few yards of the chapel. I was there twenty minutes before the time of service, and found few people in the building. But by half past six the chapel was practically filled. As the preacher stood up to announce the first hymn he impressed one as having a striking presence. The head, the face, the body and voice, — all give an impression of bigness. Perhaps Wesley’s pulpit accentuated Mr. Dinsdale Young’s stature. Designed to suit a little man it has, presumably, never been altered, and a tall preacher looks rather too big for the height of the bookboard. The preacher held the hymn book in his hand throughout the service during the singing of the hymns, and when he found it necessary to consult his notes while preaching he had to stoop an uncomfortably long distance.

The first hymn, “Jesus, lover of my soul,” was sung to a tune which though evidently known to the congregation was unfamiliar to me. I confess I didn’t like it and wished we could have had one of the old tunes wedded by long usage to Charles Wesley’s famous hymn. The opening prayer began, “Do not be a stranger among us, O Lord,” and at once stamped the preacher as a Methodist. Nobody could have mistaken him for anything else if he had prayed in the pulpit of Westminister Abbey. Not that there was anything hackneyed in the prayer, but its fervour, its evangelical and evangelistic tone were unmistakable. The preacher did not for a moment assume that all the congregation were saved, and his aim was to secure conversions. That is the distinctive Methodist note that we are in some quarters in danger of losing. After the opening prayer the hymn, “Lo! He comes with clouds descending,” was sung, and then we had the lesson which was from the nineteenth chapter of the Acts of the Apostles. The reading over, the preacher said, “Let us worship during the rendering of the anthem, ‘I will praise Thee O Lord, and magnify Thy name.’ ” Four young ladies in the choir sang the anthem very sweetly. The long prayer followed, very long and remarkably, comprehensive. The evangelistic note was even more pronounced here. “If there is an unsaved man in this chapel, Lord, lay hold of him,” cried the preacher. It was earnest, direct pleading for the souls of men. Parts of the prayer enunciated the old doctrines in the most uncompromising fashion. “He that believeth not shall assuredly be damned.” The hymn, “Weary souls that wander wide,” followed, and then came the sermon. It was a direct, telling presentation of the old Gospel. No New Theology here, and small sympathy for it.

The preacher has a magnificent voice, deep, powerful, resonant, and is easily heard in every part of the large building. His style is conversational rather than oratorical, and he is not afraid to shout occasionally. There is the old Methodist ring, the old Methodist fire, and the old Methodist conviction. No apology for the utterance of unpalatable truths, no trimming, no hesitancy, but a straight, manly talk about which there could be no misunderstanding. There is a fund of deep tenderness in the preacher’s nature, and his wide sympathies were indicated alike in sermon and prayers; but he will not palter with the truth. He believes the old Methodist doctrines, he preaches them very much in the old way, and thank God, with not a little of the old power and success. His has been a fruitful and varied ministry, and his published discourses show that it has been marked by no small measure of freshness and  originality. “Unfamiliar Texts,” “Neglected People of the Bible,” “The Crimson Book,” “The Enthusiasm of God,” and “Messages for Home and Life” are the titles of his sermon volumes, and our young ministers might do worse than take a course of reading in them.

“Jesus whom Paul preacheth,” Acts xix. 13, was the text. Everybody knew, even the vagabonds, what Paul preached. There was something peculiar about the Jesus Paul preached, for Jesus is infinite like the sea. No two artists or no two thousand would give the same sketch of the sea or of a mountain like the Matterhorn. The Jesus John preached was the same as the Jesus Paul preached,— the same  with a difference. So the Jesus Paul preached was a Jesus mirrored in the individuality, the  experience, the passion, the learning of Paul. The conception of Christ held by the Apostle had a wonderful influence on the preacher. How mighty it made Paul, in courage, in argument, in evangelism, in healing the sick. “I believe in the doctrine when I see its effects on the preacher.” “Men will be prejudiced against, or enamoured of, Jesus according to what they see in you.” The world of evil spirits recognised the preaching of Paul. “Jesus I know, and Paul I know,” — they knew Paul had the right conception of Jesus. Paul’s preaching manifested Jesus, and every body thought better of the Christ because of the preacher.

After these preliminary observations the preacher addressed himself to the consideration of the character of the Jesus whom Paul preached. First, He was the typical or typal man. Paul had almost a monopoly of that doctrine in the New Testament. To Paul Jesus was the second Adam— a re- beginning of humanity. Adam was a figure of Him that was to come— the ‘‘last Adam.” There is never {o be another. “The Son of Man which is from heaven” has come to create a heavenly order of men, a new race, a different type of humanity. A quotation from Gladstone’s favourite hymn was here given with fine effect:

O loving wisdom of our God.
When all was sin and shame,
A second Adam to the fight
And to the rescue came,

Jesus gives more than physical life, He gives life eternal. “The first man Adam was a living soul, the last Adam is a life giving spirit.”

“In Him the tribes of Adam boast more blessings than their father lost.” Christ’s resurrection from the dead is a pledge of His power to create’a new race. Turning to the young men present the preacher said: Here is the source of manhood. You think it unmanly to be a Christian. The only way to be manly is to become a Christian. If the first Adam frustrated God’s design by his fall, God would not be defeated and so sent a second Adam.

Secondly, the Jesus Paul preached was the Son of God. If proof texts were wanted the whole series of Paul’s epistles might be cited as one great proof text. Jesus was the Son of God in a sense that no mere man was. Some of the more striking passages from Paul’s letters were quoted, but the preacher’s chief arguments were the absolute sinlessness of Jesus, and the resurrection from the dead. Neither of these can be alleged of any other man that ever lived. Thirdly, the Jesus Paul preached was the Redeemer. This Jesus is not so attractive to many to-day as formerly, and in not a few pulpits Jesus the Redeemer is little heard of. But this is the Jesus Wesley preached and that Luther preached, and greatest preacher of them all, Spurgeon proclaimed a Jesus who was able to deliver men from the captivity of sin because He was Divine.

Fourthly, the Jesus Paul preached was a Christ indwelling in the believer. “Christ liveth in me.” That was a fact. The moment we believe Jesus comes by His Spirit and lives in us. “Christ in you, the hope of glory.” Finally, this Jesus is emphatically the Lord, the Jehovah of the Old Testament. Paul will be found teaching that hundreds of times in the New Testament. The sermon closed with a most earnest appeal to the unsaved to accept Jesus as a personal Saviour. The application of the sermon may be said to have been continuous, but the closing sentences were exceptionally direct and personal in their appeal.

What is the secret of Mr. Dinsdale Young’s power and success? He has a fine presence, a magnificent voice, a firm grip of evangelical truth, and all these contribute towards his remarkable ministry; but I should say that it is the passion for souls that throbs behind these that accounts for the results that attend his preaching. I have heard abler and more eloquent preachers in London and out of it; but none whose evangel is so unmistakably Methodist, so direct, so whole-hearted. I came away  thanking God that the old Methodist doctrines, preached as uncompromisingly as in the old days, could still fill Wesley’s Chapel, and win success in such a difficult soil as Edinburgh, as well as in some of the most unpromising parts of London.