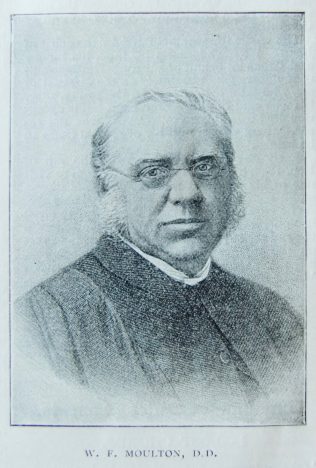 Transcription of Sketch in the Christian Messenger by John Pinchen

WILLIAM F. MOULTON was one of the most remarkable and scholarly men of the present century. The intellectual habits of his father, James Egan Moulton, were so severely methodical that his colleagues spoke of him as ‘Arrangement Moulton.’ His mother, Catherine Fiddian, was one of those young ladies who saw so much of the probationers, that she vowed she ‘would never marry a Methodist preacher – never!’ But she did; and what is more, she became the mother of a Methodist preacher. Being a strong, large-hearted, and intensely spiritual woman, she delighted in lavishing all the wealth of her affection upon her eldest son William. He was born at the Wesleyan Manse in the Leek Circuit, on March 14th, 1835. Little is known of his childhood, except that ‘he had a very mischievous habit of smashing the crockery in the circuit house.’

At an early age he was sent to Woodhouse Grove School, near Leeds. He took little interest in games, but chose rather to spend his time poring over some solid volume in a corner of the play-ground. He was very delicate, and not expected to live long. The wonder is that he survived some of his experiences at the school, especially those relating to his diet. He once wrote ‘Our greatest hardship was being compelled to eat puddings that had been turned during thundery weather.‘  Pocket-money was not a thing unknown, even in those impecunious days. On Saturday afternoons the three-halfpence per week was religiously given out. This was reduced to a penny by a missionary levy. Besides this, the missionary collector came round to extract voluntary(!) subscriptions. How pleasant to think that such experiences belong to the past!

In 1850 he was sent to Wesley College, Sheffield, for three years, from which he matriculated – sixth in honours – at the London University. An even greater event than his matriculation at this period of his life was his conversion to the Lord Jesus. ‘He left Wesley college in 1853 to take a mastership in a private school in Devonport, whence, after one year, he went as mathematical master to Queen’s College, Taunton.’ While at Taunton he first attempted to preach. He was so dissatisfied with his effort that he said: ‘I know not whether I shall repeat the attempt.‘ He did repeat it; for, about three years afterwards he was accepted on full plan.

Not the least among the events of his life at Taunton were his successes at the London University. Having matriculated at sixteen, and taken his B.A. degree at the age of nineteen, he, two years later, in 1856, took his M.A. With this last degree he was awarded the gold medal for mathematics and natural philosophy. So brilliant were his successes that one of his examiners urged him to go up to Cambridge, where he would doubtless become senior wrangler. But this tempting prospect of intellectual distinction was not allowed to overshadow that higher spiritual ideal which was slowly but surely forming in his mind. Hitherto, the reticence with which he approached the question of the ministry, and the deep sense of responsibility which weighed upon his soul, had prolonged his decision. But the year 1858 brought to an end that period of uncertainty, by his firm resolve to enter the Church of his fathers.

After passing all the tests by which the Wesleyan Church safeguards the entrance to her ministry, he was warmly accepted as a probationer by the Hull Conference of 1858. On the first draft of Stations he was down for Blackburn; but the Conference wisely altered its course, and appointed him as assistant tutor at Richmond College, where he remained for sixteen years – ten as assistant, and six as classical tutor. Up to this period mathematics had been his favourite study. This was now laid aside to give place to Hebrew, New Testament Greek, and other subjects bearing more directly upon his work. To these subjects he applied himself with such zeal that when, two years after entering the ministry, he took the Scripture examination at London University, he ‘swept the board there as he had done previously in mathematics.’ He was the only candidate who ever took a first-class in all the four subjects of the examination. In the Calender of the University for that year will be seen against his name a special mark of distinction never given before or since. Mr. M.C. Taylor expressed the literal truth when he wrote to a friend:- ‘W.F.M. had no marks lower than the highest.’

The student, especially, is most anxious to know the secret of such marvellous success. Unfortunately in this case, ‘there are no records of any kind concerning his daily work, except such as are afforded by his letters to his future wife, Miss Hope, whom he married on Aug. 14th, 1862, after six years of honourable engagement. Unquestionably, he was a genius. But not, according to Dryden, the genius which must be born, and never can be taught. Pinder more aptly expresses the class to which Moulton belongs when he says, ‘He is gifted with genius who knoweth much by natural talent.’ In keeping with this estimate Judge Waddy once said of him, ‘He was a boy possessed of an infinite capacity for taking pains, rather than of startling talents. Thoroughness was always more characteristic of him than brilliance.’ Not worldly ambition, but a deep sense of duty to God and man inspired his soul and incited him to work. To one of his friends who twitted him with a desire to be superior to other men he replied: ‘I do not care at all about being superior; but I should like to be equal. It is my duty to become all that I may become.’ The triumph of perseverance has seldom been more brilliantly exhibited than in the life of this great scholar. While equal in character to his remarkable colleagues at Richmond, ‘he quite outstripped them all in the latest methods of scholarship.’

Once during this Richmond period he was animated by a passion for missionary work, and went so far as to offer himself, indirectly, to the Missionary Committee for an appointment in China. The Committee decided that he ‘would do more for the Missionary cause by training men for the service, than by going out to the foreign field himself.’

The great work which revealed Dr. Moulton to be an independent scholar of remarkable discernment and promise, and which brought him into personal touch with Bishop Ellicott, was his masterly edition of Winer’s ‘Grammar of New Testament Greek.’ This however, only prepared the way for a greater honour, than which none has ever before or since been conferred upon a Methodist preacher. In the year 1870 the question of New Testament Revision was brought before the Upper House of Convocation for the Province of Canterbury by the Bishop of Winchester. A Revision committee was formed, and Professor Moulton’s name is among the first list of scholars invited to join. To mention that Deans Alford and Stanley, Doctors Hort, Lightfoot, and Westcott were part of the Committee, is ample proof of the high esteem in which the young Methodist was held by the scholars of his day. And the consummate skill with which he persistently defended the work of Revision, when attacked by the blind prejudice of those who tenaciously clung to the Authorised Version, was in itself sufficient justification for his presence on the Committee. His manly straightforwardness and modesty, associated with his brilliant scholarship gained for him the united admiration of the Committee, and made him the life-long friend of Bishops Ellicott and Westcott.

In the year 1873 he was appointed to an examinership at the London University, an interesting feature of which was the unique collection of testimonials he presented with his application. The following year the University of Edinburgh conferred upon him the degree of D.D., he being the first Methodist minister to receive such distinction from any British University.

For many years there had been a growing desire for a higher education for the sons of Methodist laymen. This desire found expression in the Conference of 1872, where a Committee was appointed to consider the necessary steps for the establishment of a High Class School. In 1873 a site was purchased in Cambridge at a cost of £14,000; and the next Conference accepted the recommendation of the above committee ‘that a public Methodist school should be founded at Cambridge.’ This was the beginning of the famous Leys school with which the name of Dr. Moulton must be forever associated. He made the school, and the prime factor in its creation was his singular personality. He was an ardent temperance reformer, and an enthusiastic musician. Sometimes he engaged in politics, being in ‘heart and soul a liberal,’ and taking his full share of municipal responsibility, as well as enjoying the honour of being a magistrate for the Borough of Cambridge.

His whole life was actuated by the spirit of Jesus. He gave himself, his time, his money and books on behalf of others. His magnificent library was absolutely at the disposal of any who came to borrow. In December, 1897, his wife said to him, ‘your book-bill is exceptionally large this term.’ ‘Yes,’ was the reply, ‘there were a number of special cases to be helped.’

Early one Saturday afternoon, the 5th of Feb. 1898, he walked out to Newnham to visit one of his assistant masters who was ill. A small river ran between him and The Leys. As he climbed the steps of the bridge to cross it on his return, he was seen to falter, to grasp the rail for support, and sit down as if to rest on the topmost step. He reached the top, but never crossed that river. That afternoon ‘God’s finger touched him and he slept.’

William was baptised on 19 April 1835 in the Wesleyan Chapel, Leek, Staffordshire.

William was President of the Wesleyan Conference in 1890.