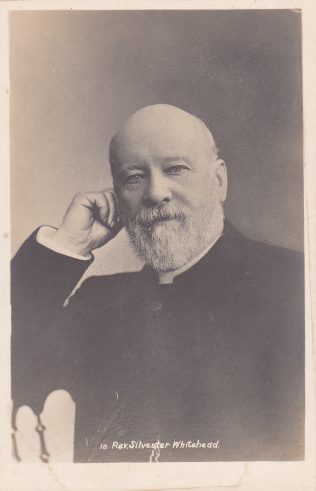 From Aysgarth to Canton

A letter was sent to Edmund Peacockin Redmire, Wensleydale, in 1870, all the way from Canton in China. The writer and the recipient were both friends and both Methodists, the writer, Silvester Whitehead was a missionary, and later to rise through Methodist hierarchy to become President of the Methodist Conference.  The letter is full of information about Chinese culture and the problems that missionaries had to contend with, but begins with a bit of chat about local people .

“Canton, March 5th, 1870. My Very Dear Friend, the last mail brought me a letter from Fleensop [in Coverdale] from which I learn that you have several times been kind enough to ask my Uncle about me …..” . so although thousands of miles divided them, friends and family kept in touch with Silvester.

Silvester Whitehead was born in Aysgarth and appears as a one month old baby in the 1841 census, son of Henry and Bettey. Silvester remained in Aysgarth  until he was a young man, working as a clerk to a corn miller, and proudly adding “Local Methodist Preacher” in the 1861 census. But by 1866 he had left Wensleydale, and left England, and was in Canton where he served eleven years as a missionary. Canton is now called Guangzhou ,  and is on the banks of the Pearl River. Canton was important to the tea trade, and had been occupied by British forces, under the Command of Sir Charles Straubenzee, son of Major Thomas van Straubenzee of Spennithorne Hall, between 1856 and 1861.

Silvester related to his friend that there were seven different missionary societies in Canton, some English, some European, and one American. The cultures of east and west were very different –

“When the preaching room is opened the people straggle in by ones and twos and stare about with open eyes and mouth at the roof, the floor, the walls etc. They run their eyes up and down one’s person as if intending to take stock. One’s clothes, and boots and beard all attract their notice in turn.  After sufficient number has entered we ask them to sit down, and begin to address them. Here difficulties meet us full in the face…”

Silvester then goes on to describe the problems of the Chinese language, both written and spoken, and one cannot but admire him for undertaking such a task.  Another problem was opium. Silvester wrote –

“ …difficulty has been increased by the influence of foreign merchants. The Chinese hate us  as much as they hate our religion. Opium has been forced upon them by foreigners – England went to war because they destroyed a lot of it belonging to Englishmen … The other day I was preaching at Fatshan, and when I enumerated amongst other things forbidden that they were not to smoke opium, one man cried out “It’s you foreigners who bring it” and there was a roar of laughter.” He also raised the objection that many Chinese had been taken to work as “Coolies” in different parts of the British Empire, little better than slaves.

However, Silvester  stayed in Canton until 1877. His wife, Isabella Foster from Pateley Bridge, was with him, and three children were born in China – Florence Elizabeth in 1870, Annie Isabella in 1872  and Sylvester Foster in 1874.

In 1877 Silvester then came home and took up appointments as Minister in various Methodist Circuits. On his return he was sent to be a Minister in Darlington, and there are many reports in local newspapers of his preaching at Bondgate Methodist Chapel. He was a popular preacher and speaker and travelled the length and breadth of the land on speaking tours on behalf of Missionary Societies.  He regularly came back to the Yorkshire Dales to take Chapel Anniversaries and in October 1879 he was in Masham, where a special service was held and he delivered his lecture on the “Religions in China”.  In the same month in York he addressed the Juvenille Missionary Association, strongly denouncing the shocking traffic in opium. In 1880 he was appointed to the Scarborough Circuit. Silvester kept in contact with the Dales as in August 1882 he came back to preach at  the opening of East Witton Methodist Chapel. A few weeks later he addressed Missionary meetings in York and then Boroughbridge. In April 1883 he was preaching at a meeting in Bodmin, Cornwall.  At the 1883 Methodist Conference Silvester was stationed at Cheetham Hill, Manchester. On 17th April 1884 Silvester sailed out of Liverpool for a visit to America and Canada .

Sadly his first wife died in Newcastle on the 3rd July 1881. He then married Frances Craven in 1887. By his second wife there were two sons, Norman Craven  in 1889 and Kenneth  Silvester in 1891. Silvester continued to serve the Methodist Church as minister, Chairman of various districts and then in  the year 1904 -1905  he was President of the Methodist Conference. Not bad for a lad from Aysgarth in Wensleydale!