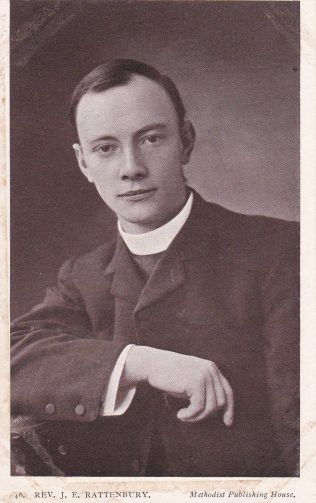 The son, grandson and brother of Wesleyan Ministers, Ernest was born on 10th December 1870 in Stanningley, near Leeds. His father was Rev H Owen Rattenbury.He was baptised by his grandfather, Rev John Rattenbury, (1828-1879) on 28th April 1871. He was ordained in 1893.
Ernest was the first superintendent of the Nottingham Central Mission. A full account of his time there can be read by clicking here.
In 1898 Ernest married Edith Mary Mantle in Leicester. They had two children, Grace Dewhirst in 1900 and Robert Mantle in 1902.
In 1907 They moved to the West London Mission and lived at 31 Woburn Square.
Ernest died in 1963. His papers are held in the Methodist archives at the  John Rylands Library, Manchester.