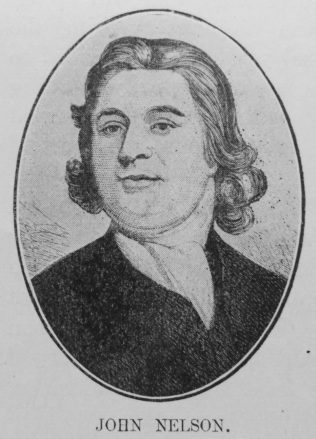 “I, John Nelson, was born in the parish of Birstal, in the West Riding of the county of York, in October, 1707, and brought up a mason, as was my father before me.” – ‘‘ The Journal of Mr. John Nelson.”

FEW men have left behind them a more interesting record of spiritual experience, of work accomplished, of peril and persecution passed through than is to be found in the Journal of this most famous of “Mr. Wesley’s Assistants.” He had a tale to tell, and he set about the telling of it in that direct business-like way which makes his “Journal” a model auto-biographical study. Were it not that the phrase has come to be a hackneyed one, we could best describe his writings as “a human document.”

For in them the man stands revealed before his readers, a simple, earnest, zealous, whole-hearted evangelist, one who owed all to the Methodist Revival, and who idealised that remarkable “Apostle of England ” whose spiritual domination of his fellows becomes an increasing wonder to all who study his life and work.

In the opening paragraphs of his “Journal” John Nelson portrays with graphic power his early spiritual unrest; he tells of his long and unsuccessful quest after God, of his dreams, and terrors, and agony of mind. How he went from church to church, from sect to sect in search of peace; trying “all but the Jews.” He went, in the course of his wanderings, to hear Whitefield in Moorfields, and his appreciation of that eloquent man’s power is singularly apt. “He was to me as a man who could play well on an instrument.” Later, on “a morning that was blessed to his soul,” he heard Wesley in the same place, and describes his sensations as the preacher “stroked back his hair, and turned his face towards where I stood, and, I thought, fixed his eyes upon me.” Nelson had long been “under conviction of sin,” but the result of Wesley’s sermon was that he eventually “found the true peace of God.” Yet, for many weeks, he continued to be sorely tried; doubts and fears assailed his soul, and trials and persecution were showered upon him.

In spite of everything, however, he persevered, and finally, after he had contrived to have a long conversation with Wesley on the way from St. Paul’s to “the farther end of Upper Moorfields,” his faith became firmly fixed, and no arguments afterwards shook it.

He began preaching in an unconventional way, relating his experience at “a meeting of Mr. Ingham’s” at Birstal, and as a result his neighbours flocked to his house to dispute with him. These disputes led to discourses, and, before he knew it, he came to be regarded as an expositor and exhorter. As a result “God raised up eight witnesses to Himself in this place,” amongst them Nelson’s wife and brother.

Sometime afterwards Wesley visited Birstal, staying in Nelson’s cottage, and thence-forwards his home became the headquarters of an increasing Methodist society. Nelson went to and fro, preaching at Leeds, Armley, and elsewhere, before going upon a tour into Lancashire and Cheshire. At Manchester he was assailed by a mob, and at Grimsby, (whither Wesley sent him) and Monyash he met with stirring experiences. And now began a series of remarkable services. Wherever he went he found “great liberty of speech,” the power of God was abundantly manifest, and many “who had come to mock remained to pray.” He had now practically abandoned his trade, going hither and thither under Wesley’s orders, and devoting himself to the work of the Gospel. In this way he travelled to London – preaching at Nottingham, High Wycombe, and Oxford on his way thither. Thence he set out for the west in company with Wesley and Downs, and preaching at Exeter, St. Ives and Land’s End – amongst other places. It was whilst upon this journey that Wesley, who had been lying on the bare floor at St. Ives with Nelson’s great-coat for a pillow, said one morning, as he clapped his companion on the side,

“Brother Nelson, let us be of good cheer; I have one whole side yet, for the skin is off but one side.”

Later, as they returned from preaching on St. Hilary Downs, Nelson tells us, “Mr. Wesley stopped his horse to pick the blackberries, saying, ‘Brother Nelson, we ought to be thankful that there are plenty of blackberries, for this is the best country I ever saw for getting a stomach, but the worst that I ever saw for getting food. Do the people think we can live by preaching?”

How much Cornwall owes to-day to that memorable journey it would indeed be impossible to say!

The Methodist preacher of that day had plenty of experiences, nor could he complain of the coldness of his reception. Many pages of Nelson’s story are occupied with singularly graphic accounts of the disturbances which attended his open-air preaching. Now and again the mob “were quietly behaved”; but generally it was otherwise. At Nottingham they threw “squibs;” at Grimsby after he had preached they attacked “Brother Blow’s house,” and, headed by the parson “broke the windows till they had not left one whole square . . . broke the stanchions of the windows, pulled up the paving in the streets, which they threw in at the windows, and broke the household goods to pieces.” The next day a drummer, whom the parson had hired to break up the meeting, after drumming “for near three-quarters of an hour, and saw it did not disturb us, laid down his drum, and stood to hear for himself; and the tears presently ran down his cheeks.”

Pressed into the Army

Later there came the crowning trial. Nelson was back in Yorkshire hewing stone during the day, and preaching at night. Wherever he went crowds flocked to listen, the countryside was in danger of being “turned upside down,” and the clergy and ale-house keepers were filled with consternation. For weeks it was rumoured that “John Nelson was to be pressed for a soldier,” and his friends urged him to abstain from preaching for a time. But his answer was always the same, “The will of the Lord be done; for the fierceness of man shall turn to His praise.” At Adwalton the deputy-constable (the keeper of an ale-house) “pressed” him, bail was refused – though several gentlemen offered £500 – and he was haled to Halifax and from thence to Bradford. The officers evidently regarded a Methodist as a peculiarly dangerous animal, and he was consigned to the dungeon, and even the “little water” he asked for was denied him. At Leeds “hundreds of people in the street stood and looked at me through the iron grate ” of the prison door, and here – as previously at Bradford – the Methodists came and “ministered unto him.”

At York he was fitted with a uniform, and underwent some training before marching with his regiment to Darlington and Durham, where he met Wesley. Meanwhile efforts were being made to secure his discharge, and at Sunderland he heard from Charles Wesley “that the Earl of Stair had assured Lady Huntingdon that I should be set at liberty in a few days.” And three weeks later he was liberated, a substitute being hired to take his place – the money being found – most probably by the London Societies.

Nelson had made good use of his opportunities amongst his fellow soldiers, preaching, exhorting, rebuking, and encouraging on every possible occasion, and the lieutenant declared that “he has done much good since he came among us.”

Thence onwards he contrived to be even more zealous in God’s work than before, and the Journal becomes a record of services held, journeys accomplished, disputations with opponents, and hair-breadth escapes from the fury of mobs and the malice of “the gentry.” Nor did he always escape, for on several occasions he was ill-treated to such an extent that it is almost incredible that he should have recovered.

He continued in harness to the end, dying at Leeds on July 18, 1774, from apoplexy, and being buried at Birstal – his native place – in the presence of many thousands of spectators.

John Nelson was a man “lively, active, and strong, of great resolution and undaunted courage.” He has attained an honoured and honourable place in the history of Methodism, and his memory must always be dear to every one who has the least regard for the early traditions of the great revival and of those who stood alongside the Founder in the dark days when “the people called Methodists ” were the best hated in the whole country.