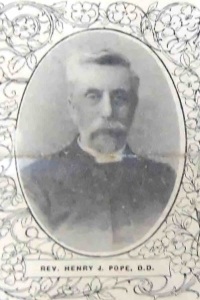 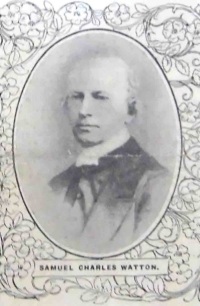 Henry John Pope was the eldest of four brothers and three sisters and was born on 2nd February 1836. In 1845, the family, who were Methodists, moved from Hull to the then small market town of Tamworth and started to regularly attend the Wesleyan chapel in Bolebridge Street there. While described as a small building it probably held around 250 people. There was a gallery with pews in which the Popes sat and the “free seats” occupied most of the ground floor below. Tamworth at that time was part of the Burton Upon Trent Wesleyan circuit the ministers being Benjamin Gartside and Thomas Brumwell who lived in Burton. They would preach at Tamworth about once a month, stay overnight on the Sunday, carry out pastoral work on the Monday and then return. While living in Tamworth, the Popes’ home was always visited by them when their appointments brought them to the town.

The services were, therefore, in the main conducted by the local preachers and Tamworth in the 1840s was fortunate to have fine preachers such as the two solicitor’s clerks, Thomas Argyle and John Evans and the Watton brothers, Thomas and Samuel Charles, grandsons of Samuel and Ann Watton who had opened their house in the town to the Methodist preachers in 1771 and sons of Samuel Watton, carpenter and builder, who had built the chapel in 1816 and who was himself a notable local preacher.

Of these, it was to be Samuel Charles Watton who was to have a deep influence upon Henry’s life. He was regarded as being a revivalist preacher and, on Good Friday evening 1846, he took the service. Henry’s young heart was touched by his message and there, kneeling at the communion rail, the conversion of the 10 year old took place. Throughout his life Henry cherished that moment. On 27th August 1878 he stayed for a couple of hours in Tamworth and made his way to the Bolebridge Street chapel which was being transformed into the Sunday school for the new Wesleyan Temple in Victoria Road which had opened the previous year. The alterations were well advanced but the communion rail was still there. His journal records “and I stood with deep emotion on the spot where I knelt 30 years ago and trusted Christ for salvation. With much thankfulness to God, with deep humiliation of spirit I again consecrated myself to the Saviour for the rest of my days ”.

Following his conversion he joined his mother’s class and received his ticket “on trial” from Rev Gartside. Later, Henry was instrumental in starting a morning service for the young people at first with just singing and readings but later including a sermon.

“The Life of Henry J Pope” by R Martin Pope