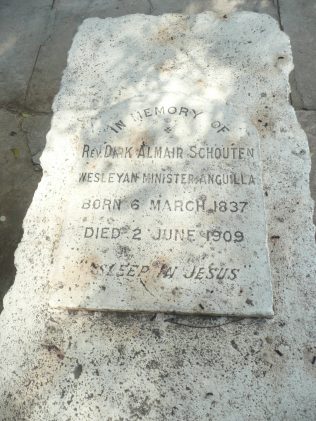 Dirk Almair Schouten was born on 6th March 1837 and entered the ministry in 1891. He worked in Anguilla and Tortola where he was instrumental in the building of the Methodist Church in Road Town. He died on 2nd June 1909 and is buried at Road Town Methodist Church.

His obituary in the 1910 Wesleyan Methodist Church Minutes of Conference reads as follows:

DIRK A. SCHOUTEN: born in the Island of St. Eustatius, Dutch West Indies, on March 6, 1839. He was the only child of godly parents, and seemed to have gradually grown into the knowledge and love of Jesus Christ. After a short course of training, he became a teacher in Antigua, and afterwards in St. Kitt’s. He was then appointed catechist and Day-school teacher in the Island of Anguilla, where he laboured for twenty-four years. In 1890 he was unanimously accepted for the Ministry by the Eastern section of the West Indian Conference, and was ordained. Amid poverty and persecution he continued to live and preach the Word of life. He renovated our properties, organised our schools, and did all the work of a Methodist minister with steady fidelity. His character was transparent. He walked with God. His habit was that of constant prayer. On June 2, 1909, having the day previously preached his last sermon, he was seized with great pain, and passed into the glorious sunshine of God’s presence, declaring “I am well – all with me is well.”