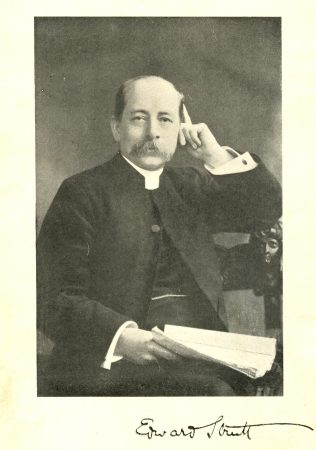 Edward Strutt was born in 1853 at Mansfield Woodhouse, Notts.  He was the youngest son of master bootmaker George Strutt.  He became a Methodist Missionary and worked among the Tamil people in the north of Ceylon.  He was appointed  Principal of the Central School, Jaffna, in 1876, for 2 years, was based at Kalmunai in 1878, for 1 year, and Trincomalee, 1879, for 2 years. He then moved to Colombo in 1881 for a further 6 years, still working with the Tamil people.

Edward married Katharine Osborn (born 8th Sept, 1853), the youngest daughter of Rev. Dr. George Osborn, who served as General Secretary of the Wesleyan Methodist Missionary Society, for 17 years before being appointed a Tutor, and later Principal, at Richmond College, Surrey.  Five of Rev. Dr. George Osborn’s seven daughters married Wesleyan ministers, four of whom were missionaries, but that is not too surprising, as during this time missionaries were trained at Richmond College, where Rev. Dr. George Osborn was principal.  There is very comprehensive ancestry and biography of the Osborn and Derry families here: http://www.biblicalstudies.org.uk/pdf/whs/46-4.pdf

Edward and Katharine (spelling varies, but Edward’s will and census agree on Katharine) had two sons, Raymond Hugh Strutt, and Arnold Unwin Strutt, born at Colombo in 1884 (possibly twins), which may have prompted their move from Trincomalee to Colombo.   Edward wrote a book published in 1892, ‘Memorials of Thomas Lowe of Rusholme’, and after Edward’s death Raymond published, ‘A Missionary Mosaic from Ceylon’, a book of essays written by his father, on his experiences in Ceylon, which seems to have been very popular as a Sunday School prize, copies can still be found from time to time on Ebay or Amazon.