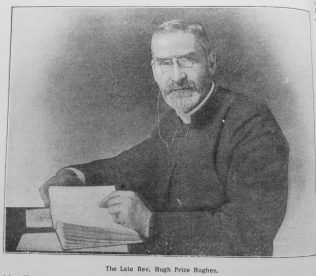 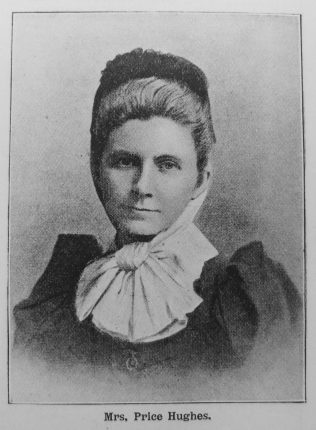 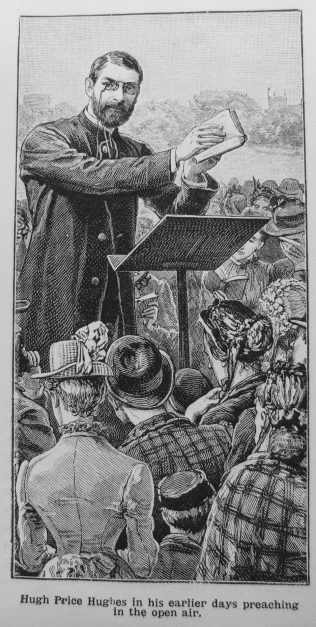 THE tragically-sudden death of the Rev. H. Price Hughes, is a severe blow to our common Methodism, and indeed to all the churches of Evangelical Christendom. Since the days of Dr. Bunting, no man has occupied so commanding a position in Wesleyanism; and certainly to the mother Church the death of so eminent and forceful a personality falls as an irreparable loss. The Venerable Dr. Rigg says: “It is certain that we shall never look upon his like again, and those who sometimes differed from him most seriously will be among those who feel most profoundly the loss of a man so gifted and so evangelically earnest from the ranks of the Christian ministry in England, and specially of the Evangelical leaders in London. If he had only learnt to spare himself he might have lived as a Christian leader for many years to come, for he came of a stock full of intense life and exuberant energy.”

We had hoped that his recent breakdown in health had been quite overcome, for it was remarked that on the evening before his death he had never preached with more freedom and power. But it has been ordered otherwise; possibly his exhausted energies could not recover their normal play, and there is at least an element of compensation which a multitude of sorrowing minds may easily seize upon in the thought that he has been spared the fretting and enfeebling of slow decay, and we can think of him as the bright, vigorous, ardent personality who has fallen as the soldier could wish, gloriously in arms. Mr. Hughes was the son of Dr. John Hughes, a Carmarthen surgeon, a noteworthy public man. His grandfather was the redoubtable Rev. Hugh Hughes, the foremost Wesleyan minister of the Principality. Deriving the best elements of the Celtic stock, with a Jewish strain on his mother’s side, he owed much to Nature’s dowry, but even more to his early religious training. When he was thirteen years of age and attending a boarding-school at The Mumbles, Swansea Bay, a number of Cornish fishermen visited the Wesleyan chapel there. Hugh was deeply impressed by their enthusiastic piety and passed through a severe spiritual crisis, which resulted in decision for Christ. At fourteen he preached his first sermon to a few old people in a cottage from the text, “This is a faithful saying, &c.” Soon after, although he had been destined for the law, he wrote to his father:-

My Dear Father, – I believe it is the will of God that I should be a Methodist preacher. – Your affectionate HUGH.

The Doctor replied:-
My Dear Boy, – I would rather you be a Methodist preacher than Lord Chancellor of England. – Your affectionate Father, JOHN HUGHES.

“Belief’s fire once in me,
Makes of all else, but stuff to show itself;
We penetrate our life with such a glow
As fire lends wood or iron.”

To have known him intimately must have been a high privilege. He was humble and gentle, courteous and chivalrous, the fairest of fighters, and self-forgetful in the interests of others. The secret of his career lay in his passionate love of Christ. As one who knew him well remarks:- “It was characteristic of the real Hughes that he confessed his favourite hymn was ‘Jesu, Lover of my Soul,’ and his favourite lines (written in his will to be put on his tombstone) ‘Thou, 0 Christ, art all I want.’ ” Some have described him as the Napoleon of Wesleyan Methodism. We prefer to think of him in connection with his last day on earth, when he attended a lecture by Sabatier on “St. Francis of Assisi, his influence on the present Century.” He was profoundly interested in the subject, for apart from any literal following of St. Francis, he felt that as a Christian preacher and Socialist he himself could “endorse ” the mediaeval Missionary-Saint, since such a life was in so marked a degree a copy of his Lord’s. We shall for many days sigh “for the touch of a vanished hand and the sound of a voice that is still.” We shall sorely miss him in the day of stress and storm, but it is certain that his influence will abide and bear fruit in the Christian Churches, and that “he sleeps, to wake.”

Hugh was born on 9 February 1847 at Carmarthen, Wales, to parents John Hughes, a surgeon, and Anne Phillips.

Hugh was president of the Wesleyan Conference in 1898.

Hugh died on 17 November 1902 in London following a stroke.