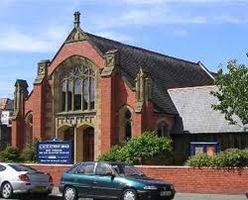 The story of the beginnings of St David’s Methodist Church, Craig y Don, goes back to 1859 when the first English speaking Wesleyan Society was formed in Llandudno, and through whom the first Wesleyan Methodist Church in the town, St John’s, was built in 1866.

In the Llandudno Wesleyan Circuit minutes for 1894 there is a request from the Local Preachers Meeting asking the Circuit to look into the need and opportunity for a second place of worship in the area. Eventually, the rapidly growing neighbourhood of Craig y Don was selected, and various temporary locations were used for the new Wesleyan Mission Chapel, which began in June 1897.

But it was not until 1924 that the current church building was constructed. On Wednesday 23rd January 1924 the foundation stones of the new Chapel were laid, and by November of the same year the church was complete! At the Annual Leader’s Meeting of St. John’s Methodist Church, held on December 12th 1924, it was agreed that St. David’s was now a Church in its own right, and would have its own Leaders’ Meetings. The Sunday School was built in 1925.

The next adaptation of the building to meet the needs of an ever growing congregation and community in Craig y Don was envisaged in the 1980’s – an open, airy coffee lounge, alongside an enlarged hall, with a modern well equipped kitchen and accessible toilets placed centrally to serve both facilities. The sanctuary was also modified – the choir stalls and half the pews were replaced with chairs to create a space for alternative forms of worship, and the stained glass windows were removed and replaced with clear glass so that the congregation could see out and the community could see in. The work was finally completed in 1997.

The latest phase of development, which was undertaken in the 90th anniversary year, 2014, was to build a wheelchair accessible sensory garden along the side of the church, an under-used area in the past. This, alongside the existing front garden, now provides a further contribution to the life of the neighbourhood and the witness of the Church.

St David’s continues to be a lovely and active church at the heart of its community.