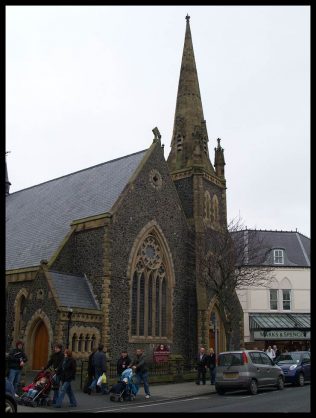 St John’s Methodist Church was part of the expansion of Llandudno in Victorian times. The pioneering of Methodism in the town was done by Rev. E. Crump, appointed in 1859 to the Carnarvon and Bangor Circuit. Crump and the local society pioneered a plan for a church building, a temporary structure, which was all that their immediate resources could provide. This would suffice for their needs at the moment and would give a breathing-space during which a more far-reaching policy could be devised and funds could be raised to meet it. The chapel was completed in August 1861.

How were the funds to be raised to build a more permanent structure? The local society was fortunate in that the Methodist Church at country level (the Connexion) was waking up to the importance of providing facilities for Methodist worship in the holiday resorts. In 1861 Conference, the governing body of the Methodist Church, decided to “consider the position of Methodism in some of the principal sea-bathing and watering places in the kingdom” and decided to make aid grants to stimulate mission in such places. As a result, a grant of £1,000 was made to Llandudno Wesleyan Methodists from the wonderfully named “Watering Places Fund.” And on 27th September 1866 the new Church, capable of seating hundreds of people, was opened at a total cost of church and minster’s manse (home) of £5,642:10/9d. All this was achieved by a membership of only thirty three!

The theological influence of the Oxford Movement in the Church of England found architectural expression from the middle of the nineteenth century in the work of Pugin and others, who advocated the “purification” of ecclesiastical architecture, in the form of a return to the style of the thirteenth and fourteenth centuries, the Gothic Revival. This had its effect on Methodism – in 1850 F J Jobson, an architect working for the Methodist Church, published his account of Chapel & School Architecture, in which he expounded the view that a chapel should “look” like a chapel, i.e. it should use Gothic architecture, as opposed to Roman or Grecian architecture which had previously been in vogue. In the third quarter of the nineteenth century there was a rush of new buildings, of which almost all of the English Methodist ones used Gothic style. In the hands of some expert architects this style became more sophisticated and elegant as the century progressed. Sometimes similar designs were copied from one chapel to another. St John’s, Llandudno of 1866 and Queen’s Road, Aberystwyth of 1869 shared the details of a corner tower with lancet windows (tall narrow windows with a pointed arch at the top) and a tall spire, and a dominant gable with a large multi-light arched window. The magnificent hammer-beam roof was added in 1877, covering over the original barrel ceiling. It seems that this alteration was made so soon after the building was completed because of problems with the acoustics – “a talkative demon” that “whispered in the rafters” and “haunted the preacher.”

For over a century St John’s had served the needs of both residents and holiday-makers, but by the 1970s the building needed serious restoration to secure its future. One option was to demolish the building and have a joint new development with a store, the store being on the ground floor and the church on the upper (churches in Wrexham and Blackpool had undertaken similar schemes.) There was much controversy in the town, culminating in a public enquiry in 1977. The church had been grade II listed in 1976, and a decision was taken to keep the listing and restore the church. This was the decision of the public enquiry, but of course the responsibility for the restoration lay entirely with the church. Fund-raising and management of the project became a major issue.

But, under the leadership of Rev Donald Ryan, the restoration scheme went ahead, taking most of the 1980s to complete phase by phase. The slate roof was replaced (the original dual colour patterning could not be retained due to the quality of the slate), the outside walls re-pointed, the tower and spire renovated, and the Mostyn Street window (at the back of the church) was replaced. New buildings were also created for offices, meeting rooms, kitchen, church hall, etc. This was paid for by leasing some land to Marks & Spencer. The inside of the church was completely remodelled: the walls were relined, the floor was raised, the heating system changed, the lighting upgraded and carpeting added. Three slim windows in the chancel had been blocked up in the 1940s, and these were reopened, with a new design by Rev Ryan to integrate them as a single entity. They depict an empty cross symbolising the resurrection of Jesus, red to symbolise the presence of the Spirit, and with shafts of gold radiating from the cross to represent the kingship of God and Christ. The two birds are an eagle, the symbol of St John the Evangelist, and a dove, the symbol of the Holy Spirit. Two new windows in the transepts were also created – a Wesley window commemorating the founder of the Methodist Church, and another depicting Jesus commissioning the disciple Peter. Finally, the organ was re-positioned and restored.

St John’s continues to be at the heart of the community of Llandudno, serving both residents and the many holiday-makers who flock to the town.

Further details of the Church’s work can be found in the attached PDF, which has been created from an exhibition in the Church during the summer season.

Further details of the history and restoration of the Church can be found in an article by Rev Donald Ryan in the Bulletin of the Wesley Historical Society in Wales, Number 3 – 2013.