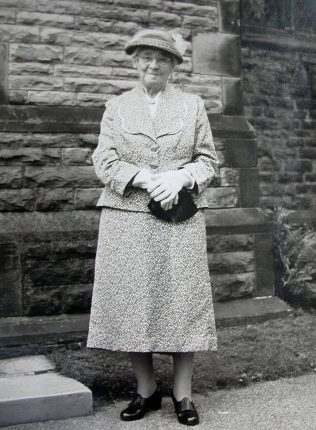 When my mother died in 2005 I came across an article which is transcribed below. This article, sadly without dates, was in a Kenilworth Methodist Church Magazine and my father’s maiden Aunt Bessie Dale, who lived in Randall Road, would have given it to Mum at some time.

Mrs. Ruth Webb nee Baskerville (1876-1964) was my very much loved father’s Aunt who in 1902 married James Webb at Alderley, St.Mary, Cheshire. They farmed Camp Farm, Beehive Hill, Kenilworth and retired about 1930 to Alderley Edge, Cheshire. I only have to think about them and it makes me smile, and as it says at the end: There was only one James Webb.

Present day worshippers, taking note of the overfull car park, and looking for somewhere to leave the car, may be surprised to learn that there are still folk around who remember when only one motor car came to Sunday morning worship. It stood outside l Priory Road for the duration of the service. Presumably, it could have stood there for a fortnight in those days without anyone removing a wheel, dismantling the magneto or siphoning petrol from the tank perched over the engine.

It was called a Bean and was in the possession of a well known, bustling Wesleyan farmer named James Webb. James, it should be noted, was something of a character.

The departure of Mr. & Mrs. Webb, after morning service, was something not to be missed and no member of the congregation would consider making for home and Sunday dinner without seeing the Webbs safely away. Firstly, in the warmer weather, James would remove his jacket and then produce, from the rear of the vehicle, something which today would be called an offensive weapon. It was, in fact, the starting handle which he duly inserted in position, and then, having adjusted petrol and air on the steering column, proceeded to turn over the engine in gentle fashion. All of a sudden, as if by inspiration, James administered a vigorous swing and the Bean, as if in protest, burst into shattering life. Not until James had adjusted petrol and air once again and the Bean sounded more like a motor car than a threshing machine, did Mrs. Webb hand James his jacket, adjust her hat, pull down her veil and take up position on the front seat soon to be joined by James.

But this was not the real departure – only the prelude. It was common knowledge that the steering of the Bean in those days did not permit any fancy turns, and so James was obliged to drive off to that part of Kenilworth once known as Station Approach – that is to say when we had a Railway Station and trains ran – where, taking care to circumnavigate Butchers cab – which claimed to meet all trains and conveyed visitors to and from the Ruins – was able to put the Bean on course.

Meantime the congregation waited expectantly, as in Advent, until the noise over the roof tops proclaimed, “John is nigh”. Soon James was upon us, saluting with hand raised to bowler hat with Mrs. Webb holding her veil and waving. The chapel goers immediately responded with cries of “good bye”, “take care” and “see you next Sunday”, etc. with much hand waving as the Bean, gathering more speed, quickly disappeared from view. The need for a speedy return home to Camp Farm, Beehive Hill, was never revealed to the members of the old chapel. Still, never mind, James it may be reported, was something of a character. There was only one James Webb.