known as 'The Oldest Methodist' 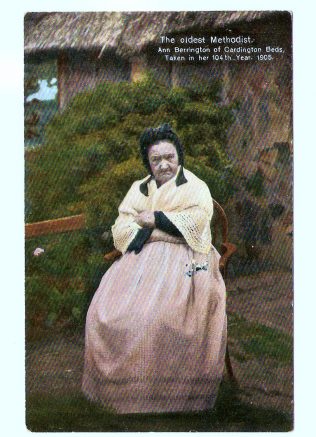 Ann Berrington (née Parrish) was born in Cotton End, Bedfordshire. Her age on the postcard shown differs from other records. Ann’s obituary in Luton Times and Advertiser states that she was born on May 11th 1806 which ties in with the 1891 Census when her age is stated as 86.

Ann married John Berrington on 24 December 1822. She and John had 10 children and lived in Chapel Lane Cardington. Ann remained in this cottage until her death in January 1909 despite having ‘been offered better accommodation’.

Ann was a member of Cardington Wesleyan Methodist Chapel. Norah Addington describes Ann as being a ‘zealous Methodist and much respected in the village’. Despite having been widowed for some years, Ann subscribed to the Wesleyan Methodist Twentieth Century Fund.

Villages of The Ouse – Peter Grey