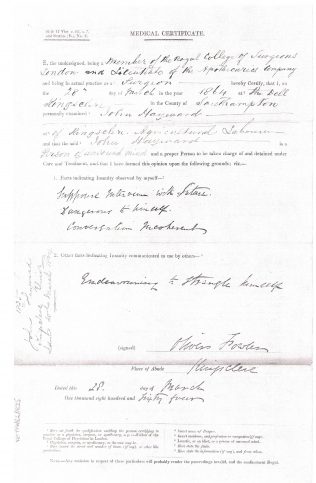 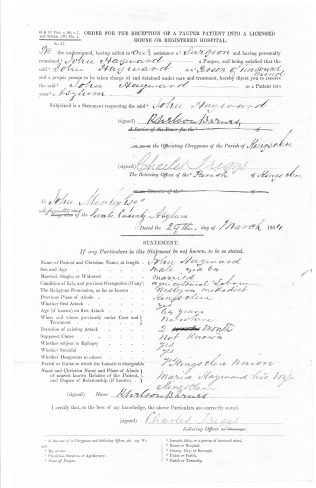 John Hayward was my 4th Great Grandfather. We found documents  that he was recorded as a “Wesleyan Methodist” living in Kingsclere, Hampshire at the time he was committed for mental illness. According to the census returns he was born in Shaw near Newbury but I cannot find out anything more about his birth or parents. He married in St Mary’s Kingsclere in 1827 (to Maria Richardson).

The document in the photos is the first I understood that he was a Methodist.  I am interested in whether there are any Methodist records that might reveal more about his history in Kingsclere, his origins in Shaw or who his parents were. Info below is from his medical records while in the asylum. Interestingly the “club” to which he belonged stopped payment for his illness as it did not cover mental problems but I wonder if this might have been a Methodist friendly society of some sort. Hoping someone will find all this interesting and may be able to help with further info on Methodism in the Newbury/Kingsclere area.

DETAILS COPIED FROM THE CASE BOOK REGISTER HELD AT WINCHESTER RECORDS OFFICE. CASE BOOK IS NOT AVAILABLE FOR GENERAL VIEWING BECAUSE IT IS WATER DAMAGED. HOWEVER, AFTER PERSISTENCE, I WAS ALLOWED TO VIEW IT AND THE ENTRIES FOR JOHN HAYWARD (PATIENT NO. 1835) WERE QUITE CLEAR AND LEGIBLE.

It is not known what caused this man’s illness. His father was insane.  He belonged to a club which discontinued the payment allowed him, three weeks ago, as it was not responsible for mental illness. This appears to have preyed on his mind and made him worse. He formerly had fits, but has been free from them for eight years. Regular and temperate in his habits.

He is suicidally inclined having attempted to strangle himself and also jumped out of a window 8 feet from the ground. His temper is sullen.  His conversation is chiefly on Religious subjects. His memory is indifferent. He labours under religious delusions. His affection kindly.

Expression rather vacant. Locomotion perfect but when he walks feels as if he should drop down. Bodily healthful. Appetite good. Pulse and circulation – 60, very intermittent and irregular. Sleep – very bad.

PROGRESS OF THE CASE AFTER ADMISSION

April 7 – Since admission this patient has behaved very well and quiet. He has already begun to make himself useful in the ward. He is improving much. He answers questions rationally. Has not shown any sign of being destructive or dangerous. Does not appear to have many delusions. Bodily health improving. Sleep – fair. Appetite – good.

May 5 – Is in moderately good bodily health. No mental change has taken place. He is quiet and civil. Answers questions rationally. Is tolerably free from delusions.

May 23 – Much the same as at former reports.

June 15 – Has improved considerably of late. He is quiet and well behaved. Does a little work in the ward. Converses at times rationally. Generally answers questions collectedly. His bodily health is much better. He is quiet at night. Appetite good.

July 4 – No change of any kind has taken place since last report.

Aug 12 – Is very much better in bodily health. Mentally very little change seems to have taken place. His conversation is quite collected and rational. He works well. Appetite good. Bodily health fair.