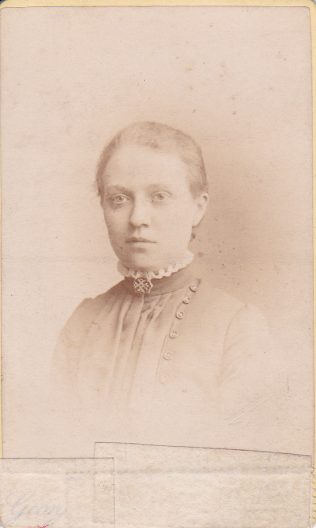 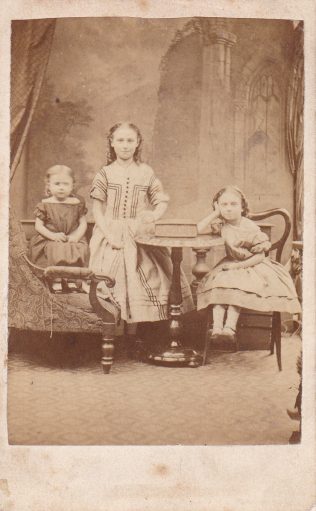 zoom
Edith, Annie and Alice Day in about 1869 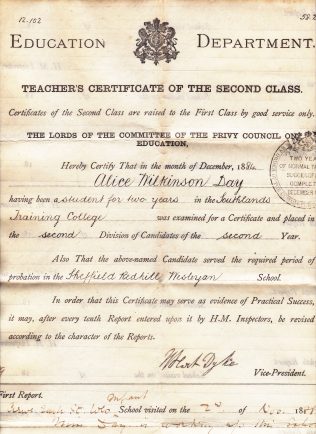 Alice Wilkinson Day was born in Brampton near Aylsham in Norfolk on 26th May 1863. Her parents were George and Mary Ann (nee Wyatt) Day and they came from Bedford. George was a shoemaker, although his father had been a sawyer. Mary Ann’s father was a builder. George and Mary Ann were married at St Paul’s Parish Church in Bedford on 14th April 1853. Their first daughter, Mary Helen, was born in Bedford in 1856, but then the family moved to Norfolk, where a second daughter, Annie, was born in 1860. The move may well have been facilitated through a connection with Thomas Babbington, a lay preacher and ‘scripture reader’ (probably from the Bunyan Meeting) brought from Stagsden near Bedford to the area by a Quaker, John Wright, to be governor of the Red House ‘Industrial School’ at Buxton (near Brampton). Thomas Babbington wrote a long and affectionate letter to Alice Day on the death of her father, many years later. Boys at the School (or Reformatory) were taught shoemaking, amongst other things, so it is quite possible that Alice’s father worked there. George Day’s sister, Sarah, had also moved from Bedford to become matron of the Red House by 1861, so it is possible that she moved there first and encouraged George and family to join her.

The move to Sheffield

Sometime between 1863 and 1867 the Day family, now with three little girls, moved to Sheffield where George was employed as ‘Chapel Keeper’ or caretaker at the Wesleyan Chapel on Carver Street. (This is now a bar!). A fourth daughter, Edith, was born there in1867.

From 1876 to 1881, (so aged 13 to 17), Alice worked as a pupil teacher in the infants department at Springfield Board School in Sheffield. The school had only opened in 1875 and was the ‘jewel in the crown’ of the Sheffield School Board. The building is preserved today as a classic example of a Victorian school.

Soon after the Census in 1881, Mary Ann Day died, aged 52. Sadly her eldest daughter, Mary Helen, also died later that year, aged only 25. George was married again in 1882, to Cecilia Cawton, the middle-aged, spinster daughter of a cutlery manufacturer. It may have been this that prompted Alice to take the scholarship exam to qualify for admission to Southlands Wesleyan College in Battersea to train as a teacher. She spent 1883 and 1884 at Southlands and obtained a ‘Teacher’s Certificate of the second class’ in December 1884.

Alice’s first job was at Adys Road Infants School in London, but she left after only a few weeks to ‘take up a headship’ at Red Hill Wesleyan School, back home in Sheffield. She remained there from March 1885 to Christmas 1887 by which time her sister Annie had married Thomas Frost, an ivory cutter and dealer.

Alice’s next job was at Earle Street Wesleyan School in Crewe. It was a new school, built in 1887, near to the Earle Street Wesleyan Chapel. We don’t know if Alice was a member there, or at West Street Chapel close to her lodgings or indeed at Trinity Wesleyan Chapel on Mill Street where she was certainly a member later on. There may have been a Methodist connection which brought her to Crewe, she did not have family there. Perhaps she just saw the job advertised.

Alice lived at 3 West Street from at least March 1891 to at least March 1901. Initially she was boarding with Ann Coultas, a widow, and her daughter, Jane Coultas, who was also an Elementary School teacher, perhaps a colleague of Alice’s. By 1991 she is described as the head of the household and has a servant, Sarah Parker.

In 1890 Alice’s sister Edith married Harold Wilson, a School Board Visitor. Edith and Annie and their families stayed in the Sheffield area. George Day died in Sheffield at the end of 1893, aged 67. Judging by the letter written to her by Thomas Babbington at this time, Alice was very upset at becoming an orphan and felt she now had no home. He comforts her by reminding her of her faith and how lucky she was to have pious parents who survived until she was an adult.

From November 1892 to December 1909, Alice worked at Mill Street Wesleyan School, close to Trinity Chapel. Then she moved to Buck Street Council School . By March 1911 she was living at 42 Gainsborough Road, a boarder in the household of a widow, Margaret Bland. Alice eventually bought the house and lived there for the rest of her life.

Alice employed Lucy Wakefield as housekeeper and she moved into 42 Gainsborough Road with her husband, Ernest, who worked as a metal machinist at the railway works in Crewe. Lucy came from a family of devout Wesleyans, the Spooners of West Bromwich. Ernest had been born and brought up in a poor part of Nantwich and had only turned to church going when he met Lucy. The Wakefields may have met Alice through Trinity Church.

Apparently Lucy and Alice (always referred to as Miss Day) did not get on well together and often disagreed. Neither was Miss Day popular with her staff at school. However when eventually after 14 years of marriage the Wakefields had a son, Gordon, in 1921, Miss Day doted on him and was kind and generous, buying him gifts and books. She was a great devotee of the Methodist School of Fellowship at Swanwick and took Gordon there in 1939.

Alice was a faithful chapel-goer and kept notebooks containing details of the services she had attended, who preached, the text and lists of hymn numbers. She was an active member at Trinity Church. At the time of the Church Jubilee in 1927 she was Foreign Missions Collector and President of the Women’s Auxiliary.

Alice died in The Barony Hospital (formerly the Nantwich workhouse) on 18th November 1953, aged 90. She left legacies to the Church and the Methodist Missionary Society and everything else, including her house, to Lucy Wakefield and her son, Gordon (Ernest had died in 1949).

Gordon’s wife remembers Miss Day as a neat, precise person, who spoke very ‘correctly’ with no trace of a Norfolk, Sheffield or even Cheshire accent.