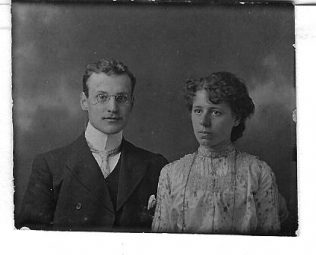 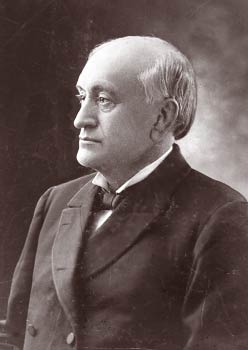 When the Revd Hugh Price Hughes was the minister in Dover (1869-1872) he influenced many people, especially in his firm stand over Temperance and in his public opposition to the Contagious Diseases (CD) Acts of the time.  One such person was Frederick de la Bertauche, a local insurance agent, who was a frequent speaker with HPH at Temperance rallies in the town.

Together in Harlesden Wesleyan Church

John Richardson’s eldest son Arthur (1858-1897) and Frederick de la Bertauche’s elder (step) daughter Hannah Maria (1859-1903) were married more than 15 years later, in 1888, after both families had moved away from Dover and both had settled in Harlesden in North London.  During the 1880s and 1890s, Frederick was the Sunday School Superintendent at Harlesden Wesleyan Church and John Richardson was a supporting teacher.

By 1880, Arthur Richardson was appointed Secretary at the Church for the Temperance Committee, so it is safe to assume that Arthur had been aware of HPH’s firm leadership principles from an early age.  Although Hugh Price Hughes was never stationed as a minister in Harlesden, Arthur as a boy of 11-14 years would have known him as a lodger in the family home in Dover from 1869-72, and again in Dulwich, aged 20-23, when the Richardsons once more came under the influence of HPH’s ministry at Barry Road. [See ‘Hugh Price Hughes and the Richardson Family’ for a reference to HPH’s pastoral connections and family reminiscences at Barry Road involving Arthur’s youngest sister Lucy]

In 1881 the first World Methodist Oecumenical Conference took place in London, and many distinguished Methodist overseas representatives visited Harlesden Wesleyan Church and Sunday School, and one year before the second Oecumenical Conference of 1891 (held in Washington, USA) we find Arthur Richardson, with his wife Hannah (nee de la Bertauche) and their 3-month-old baby Eleanor emigrating to Los Angeles.

The Hugh Price Hughes links to the Richardsons at this point are very tenuous, but Hughes was elected to attend the American Conference and praise the work of the Methodist Episcopal Church.  Also, Arthur was clearly a dedicated Methodist on his arrival in the USA, since he is soon found, by 1892, to be a Trustee of a Methodist community in the tiny hamlet of Prospect Park (now East Hollywood), sharing responsibility for the building of a new Methodist Episcopal Church, and later becoming its Sexton.

At the opening dedication service of the new Prospect Park M.E. Church (built on a plot of land which is now part of Hollywood’s Sunset Boulevard) the preacher was the distinguished Methodist evangelist the Revd Phineas Bresee – who 2 years later left the M.E.Church to become the founder and leader of the Church of the Nazarene.

It is worth speculating about any similarities between Hugh Price Hughes and Phineas Bresee.  Clearly, Arthur Richardson as a Trustee would have been instrumental in inviting Bresee to open the new Church, and would have been aware of his strong emphasis upon the pursuit of Spiritual Holiness.  Hughes’s dedication to Wesley’s principles of Perfection and Scriptural Holiness were of a different kind, even though it is thought that the effect of the American holiness preacher Pearsall Smith on him in Brighton in 1875 was considerable, life-changing and long-lasting.

How we are influenced….

However in all this speculation, it is of great family interest to know that there are many links (however tenuous) and associations which bind my ancestors to the influential ministry of Hugh Price Hughes.