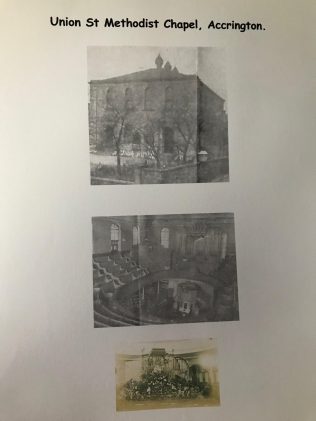 Hartley Davy was my 4x Great Grandfather he was involved in the Wesleyan Methodists for well over 50 years mainly in the Accrington, Lancashire area.

He was involved in the building of Union St, Wesleyan Chapel, Accrington. He also supported the movement for the establishment of the Sunday school in 1806.

On 30th May 1925, the Accrington Observer published the following:

A noted local tradesman in Abbey Street a century ago was Hartley Davy, from whom Davy Street derived its name. He was one of the earliest tradesmen in the street, coming to Accrington in 1797 to open a tailoring business opposite what is now the Black Horse Hotel. The business was long afterwards continued by Stantons in the original premises

Hartley Davy was best remembered by his associations with the early Methodists in Accrington. He was a prominent member of the “Glory Hall” as their early meeting place was called at the home of the Harrisons in the Lower Fold. He had the satisfaction of assisting in the erection of the first chapel in Union Street and also of supporting the movement for the establishment of the Sunday School in 1806. In conjunction with Mr Hutchinson he begged most of the money for the enlargement of the Chapel in 1834. His counsels and aid were also freely given when the present Chapel in Union Street was built in 1846.

Hartley Davy died in April 1855, at the age of 76 years and after a close connection with the Union Street Wesleyan Society for over half a century. His funeral sermon was preached by Rev. Benjamin Frankland and was heard by a very large congregation.