John Clifford from Norfolk has written a social history piece on his nineteenth century ancestors in north-west Leicestershire. This has been published on the History page of the Breedon on the Hill Parish Council website.

The fourth and sixth, Charles’s brother Joseph and sister Elizabeth, both raised their families in nearby Griffydam. Elizabeth married Samuel Haywood at Worthington in 1833. Joseph married Mary Hall at Whitwick in 1839. The 1841 census shows both families living close together in Griffydam on Elder Lane and “Chapple Row”, near the Methodist chapel. John senior was an illiterate agricultural labourer, and so were Charles, Joseph and Samuel. 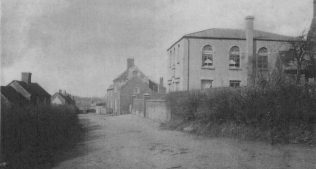 Griffydam’s Wesleyan Methodist Chapel on Elder Lane, built in 1778 and seen here around 1900. (With thanks to Samuel T Stewart and GriffydamHistory.com)

Decades earlier, John and Charles Wesley had visited the area several times. One of their greatest supporters, Selina Hastings, Countess of Huntingdon, lived nearby at Donington Hall. In the 1760s, local Methodist societies were established by John Hall. He had experienced a religious conversion under the ministry of Walter Sellon, the curate at Breedon on the Hill. Joseph Clifford’s wife, Mary, was probably a relative of John Hall.

John Wesley preached on Coleorton Moor, where Squire Beaumont sent a band of ruffians to disrupt the meeting. Their leader was the notorious collier, John Massey. Wesley ignored violent threats from Massey, who started to listen. He was greatly moved, and then forbade the gang to harm Wesley. Massey became a leading local Methodist, assisting John Hall.

Hall was one of the trustees who purchased land in Griffydam for the construction of a chapel, which was built in 1778. John Wesley preached there in 1779. The chapel closed in 2005 but still stands, and may be the oldest in Leicestershire. 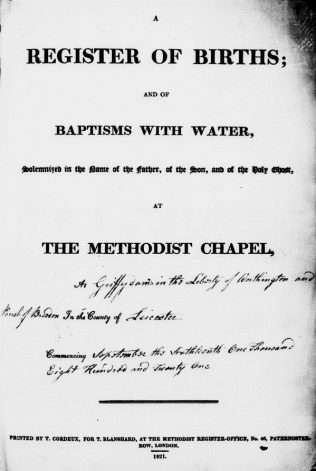 Title page of the register recording baptisms at Griffydam’s Wesleyan Methodist chapel from 1821 to 1837.

The Cliffords and their Haywood relatives in Griffydam may have all been Methodists. Samuel and Elizabeth Haywood had their first child, David, baptised at the chapel in 1834. The next four or five of their eight children were born in Griffydam. Joseph and Mary’s six children were born either in Worthington or Griffydam. The girls became seamstresses, and Joseph’s son, another John, became a colliery labourer.

Two of Joseph’s daughters were at least attending school in 1851. Their generation was the first in the family to become literate. They probably attended Griffydam’s Methodist Providence School, founded in 1847. This was the precursor to the Wesleyan Day School towards Peggs Green, which opened in 1853.

By that time, the Haywoods had moved to the neighbouring common known as the Brand. David was now in his late teens and was working in a local brick yard. The Haywoods moved to Osgathorpe by 1854, and to Belton around 1861.

Baptism of David Haywood, son of Samuel Haywood and Elizabeth and grandson of John and Martha Clifford – register entry for 23 February 1834 at Griffydam Wesleyan Methodist chapel.

Joseph Clifford died in 1861, aged fifty. He and Mary had been classed as paupers in 1851. Mary was a lace worker and stocking seamer. To add to her sorrow, only one of their children, Martha, survived into adulthood to create a family of her own. Mary stayed in Griffydam and was again recorded as a pauper in 1871. Martha and her husband, Thomas Toon, were living with Mary. Thomas provided household income as a colliery labourer and Martha as a seamstress. The first three of their six children were born in Griffydam. The family moved to Swannington, where Thomas Toon’s father gave Mary a second chance of happiness by marrying her in 1875.

In 1865, one of Samuel and Elizabeth Haywood’s daughters, another Martha, married James Bowler, a framework knitter from Long Whatton. They had a son in 1866 but, sadly, Martha died in 1867. James’s second wife was Hannah Huner. Her parents, Henry and Mary Smallwood, had lived in Griffydam and Hannah had been baptised at the Methodist chapel in 1832.

David Haywood’s wife provided him with eleven children. The ninth, Selina, was born in 1872. Like girls in previous generations of local Haywoods, she was probably named after the Countess of Huntingdon.

Several members of the Hall, Haywood and Toon families are buried in Griffydam chapel cemetery, as is John Massey.

The lives of these people were typical of those in the area at the time. To find out more about social history through the lives of these particular Clifford, Haywood and Toon families, click on ‘John Clifford (1782-1845) and his family in North-West Leicestershire’ on the ‘History’ page of the Breedon Parish Council website.