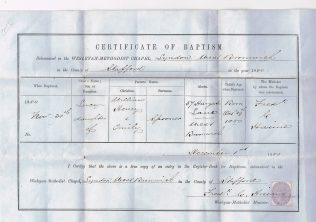 Lucy Spooner was born on 19th October 1880. Her parents were William Henry Spooner and Emily Stevens. They were married at Wesley Chapel, West Bromwich on 4th April 1876.William worked in various clerical jobs in local iron and firewood works and had some periods of unemployment. He was interested in natural history and became a Methodist Class Leader.

The baptism was conducted by Rev Frederick C. Haime who was a Minister in the West Bromwich Circuit from 1878 to 1881.

The certificate was issued the day after the baptism and is ‘stamped’, ie the Minister has certified the copy of the entry in the register by signing over a penny stamp for which a penny ‘stamp duty’ has been paid to the Inland Revenue.

I wonder how common this was? Does it give this certificate some legal standing?