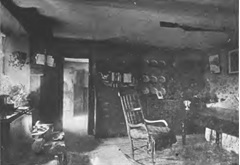 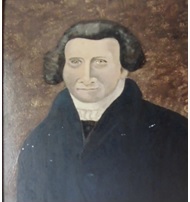 Thomas Slater was born in 1738 and from an early age was such an avid reader particularly of the Bible that it was said he would become a Parson and, because of this, was affectionately called “Parson” Slater. He was converted at the newly erected Crich chapel in 1765 to which he had been taken by the stone mason who was building a barn for him on his farm at Shottle. He joined the Society at Crich before, two years later, opening his farmhouse kitchen, which could accommodate up to 50 people, for services where Thomas Slater was undoubtedly Class Leader. The Society formed part of the Derbyshire Round, a Round being the forerunner of the Circuit, and was regularly visited by the Round preachers one of the most notable of which was Francis Asbury, the first Bishop of the Methodist Church in the Americas, the 200th anniversary of whose death was commemorated last year.

In about 1770, Thomas Slater became a recognised Local Preacher. For nearly 50 years, he fervently spread the Gospel and it was undoubtedly through him more than anyone else that the Derbyshire Methodist Societies were formed. Preaching was far from easy for him. He had to endure being pelted with stones and eggs. On one occasion, while stood to preach by the side of a house, someone from a bedroom window using a stick with a hook on the end tried to make him an object of ridicule by lifting off his wig and twirling it round. The power of his message was undiminished though and many through him were brought to know their Lord, the most notable being Joseph Taylor converted at an open air service in Duffield. He assisted Thomas Slater with his services and later became one of Wesley’s preachers, a member of the Legal Hundred, the first Superintendent of the newly formed Ashby de la Zouch Circuit  in 1792 and finally, in 1802, President of Conference.

In Duffield, following the formation of a Society there through his open air preaching, he hired a room for the 1770- 1771 winter and finally secured a site for the first chapel which opened in 1777. He also procured a site for a chapel in Belper which opened five years later. It seems that, while not recorded in his Journal, during its construction Thomas Slater invited John Wesley to come to Belper to preach and that a crowd proceeded to the site of the chapel led by him arms linked with Thomas Slater on one side and holding the hand of Mary, Thomas Slater’s daughter, on the other. Certainly, Mary would relate how, as a girl of twelve, she had heard John Wesley preach in Belper Market Place and had walked in procession to the site of the chapel alongside John Wesley who had held her hand.

Upon becoming a local preacher Thomas Slater had vowed that if the Lord showed him some fruits from his work, he would preach the Gospel in every town and village in the county. In 1809, he said that he had fulfilled that vow. He was a familiar figure riding his famous mare and his stamina was formidable. At harvest time he would leave with his labourers, travel some 8 miles to preach and be there next morning when they arrived for work. On one Sunday, he preached in Leicester, Nottingham and Derby.

In 1816, John Slater, his son, built a chapel on the garden attached to the farm but not before his father had held several prayer meetings on it “to know the Lord’s will”.

He died in 1821 aged 83 leaving a widow of nearly 85 to whom he had been married for almost 64 years, 9 children, 60 grandchildren and 24 great grandchildren. It was from this line of descendants that two would come, Humphrey Cooper and his son, William Gervase Cooper, who would have a profound effect on the development of Methodism in a small corner of North West Leicestershire one part of which is in the National Forest East Circuit and the other in the South Derbyshire one.