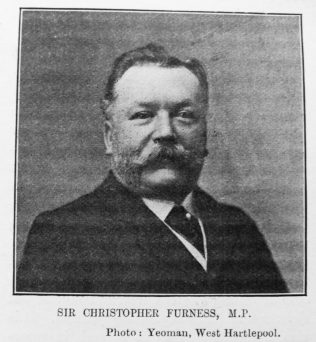 Transcription of Sketch in the Primitive Methodist Magazine by C.P.Holloway

SIR CHRISTOPHER FURNESS, who is able to add Kt., M.P., J.P., and D.L. to his name, is a strenuous and go-ahead man, with all the bearing of one coming from the north.

He represents Hartlepool in Parliament, and has been associated with that locality since the day of his birth on April 23rd, 1852. After a private education he entered the business of his family at the age of seventeen. Within a year or so he had occasion to visit Denmark and Sweden in the interests of his firm, and was away during the time of the troublous days of the Franco-German war. It was while in Sweden that Mr. Furness saw, and not only saw, but seized, an opportunity of a coupin connection with the hostilities then proceeding.

The River Elbe was blockaded at that time and Mr. Furness promptly bought up all the flour and other produce then lying in Swedish and Danish ports, and shipped the same back to England by the steamers which would otherwise have been idle owing to the blockade.

So successful was the deal that on the return of Mr. Furness to England he was admitted as a partner, although only nineteen years of age. With his foot thus on the ladder of success Mr. Furness was not slow to avail himself of further opportunities which offered themselves a few years later.

In the year 1875 he commenced to build steamers, his firm having previously worked a fleet of American schooners in importing produce from the United States to the North Eastern ports of our own country. From small beginnings thirty years ago Sir Christopher has since developed the famous “Furness Line” of steamers trading between the Tyne, Hartlepool, and Dundee on this side of the Atlantic, and Boston, New York and Montreal on the other side.

When Mr. Withy retired from the well-known Hartlepool ship-building firm of which he was the head, Sir Christopher acquired Mr. Withy’s interest and afterwards amalgamated it with his own firm, under the since familiar title of “Furness, Withy and Co., Limited,” of which he is now the head.

Much more might be written of the business career of a Methodist who is associated with some fourteen companies, and stands as one of the most extensive employers of labour in the country.

Sir Christopher, who, by the way, was knighted by the late Queen Victoria, in recognition of his distinction in the world of affairs, has been a munificent man and gave no less than £20,000 towards the establishment of pensions for aged seamen in his own district of the Hartlepools.

Several years ago Sir Christopher wrote and lectured on the subject of the American invasion of our own land. He is one who has not lost faith in British progress and believes that Englishmen still possess those qualities of indomitable perseverance, intelligence, practical wisdom, and the capacity for work, which have contributed to the up-building of our mighty empire.

“No power,” he has said, “can prevent the young, educated man from achieving some kind of success, although persistent work and effort are essential. The young must learn, and the middle-aged and old must encourage and help them and have as well, open minds, receptive to new ideas and the spirit of the age – progress.”

Sir Christopher has been honoured in the north, for among other offices, he has occupied the position of chairman of the Hartlepool Board of Guardians, that of a member of the Town Council and School Board, and after the passing of the Local Government Bill, was elected to the first County Council of Durham.

In 1889 the Government, recognising the special shipping knowledge of Sir Christopher, appointed him to act with the Board of Trade in defining the free-board of British vessels. He is a Justice of the Peace for the County of Durham and the North Riding of Yorkshire and is also Lord of the Manors of Cundall and Grantly, owns no less than 30,000 acres of land and stands in the peculiar position of being a Nonconformist with the patronage of seven livings at his disposal.

Although of necessity a very busy man Sir Christopher finds time for recreation, which often takes the form of travelling and yachting. Three years ago he built the first steam turbine yacht – a handsome vessel of 800 tons – to cross the Atlantic, a trip he has accomplished altogether more than a score of times.

This keen business Methodist has used his great wealth in many philanthropic channels, and although one does not hear of his actual activities in connection with church work, there are many evidences of a munificence which only a man of the standing of Sir Christopher Furness could accomplish for the benefit of his fellows.

Christopher was born at West Hartlepool to parents John, a grocer, and Averill.

Christopher was a Member of Parliament representing the Liberal party from 1891-5 and later 1900-10. He received a knighthood in 1895 and was raised to the peerage as baron Furness, of Grantley, in 1910.

Christopher married Jane Ann(ette) Sugitt (1855-1930) in the spring of 1876 in the Northallerton Registration District, Yorkshire. Census returns identify one child.