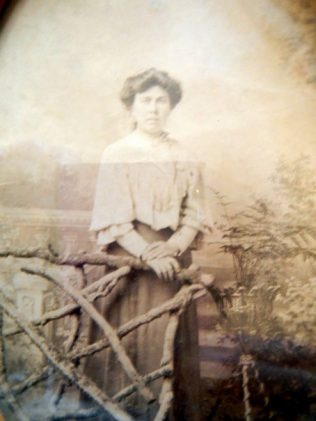 Edith was born on 26 January 1881 at Bilston Staffordshire, to parents Henry, a carpenter by trade, and Edith Alice. The family moved to Long Compton where her father was a carrier between Long Compton and Banbury; he made his own wooden leg! Edith attended Long Compton Wesleyan Chapel.

Before her marriage she had a job in Tingewick and would ride her ‘sit up & beg’ bicycle to visit her parents on her days off (about 27 miles!). She met her husband at Tingewick Wesleyan Chapel.

Edith married Leonard Clifford Ireland (abt1885-1931) in late 1907 at Tingewick Wesleyan Chapel. Edith and Leonard started their married life at Shirley Farm, Little Wolford which is between Shipston on Stour and Long Compton. They had five children.

Edith was still young when she became a Guinea Methodist. She had a certificate for giving her guinea and was still proud of it until she died in her 90’s. She was a true Christian in every way. When I was young we had a bible reading every evening as she lived with us. My mother followed her by also playing the organ in chapel.

Edith died in late 1971 in the Banbury Registration District, Oxfordshire.