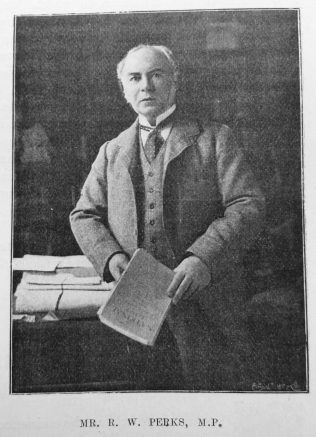 Transcription of Sketch in the Primitive Methodist Magazine by C.P. Holloway

MR. R.W. PERKS, who has just been re-elected for the Louth division of Lincolnshire, is a man of many parts. His appearance rather belies him, for a stranger would take him for a pros perous countryman rather than a keen London solicitor.

Not only has he followed that profession with much success, but Mr. Perks has also, within recent years, solicited in the religious world, to such purpose, that the Twentieth Century Million Guinea Fund has become an accomplished fact for the aggressive purposes of his own denomination.

Mr. Perks was born in the year 1849 and comes of good Nonconformist stock, for his father was at one time President of the Wesleyan Conference, and the son has worthily followed in the parental footsteps.

Thirty years ago the representative of Louth entered into partnership with Sir Henry Fowler, whose mature judgment will be of great service in the new Liberal Cabinet.

The two men have been a tower of strength to the Wesleyan cause and Mr. Perks has had much to do with the great scheme which culminated in the securing of the unique site at Westminster, facing the historic Abbey, and bringing Methodism to the very door of the Established Church.

Not only has Mr. Perks engineered his denomination into a position of prominence but he has also had much to do, in his professional, capacity, with many of the railways, docks, and other public works which have been brought before Parliament for official sanction. In recent years he has taken a leading part in the electrification of the Metropolitan District Railway, a development the fruits of which Londoners are now reaping in a cleaner and quicker service beneath and around the Metropolis. The scheme originated with the late Mr. Yerkes of Chicago, and Mr. Perks, in this country, had his hands full until the system was put on a practical footing.

Among other public works in which Mr. Perks has been interested may be mentioned the Charing Cross and Hampstead Railway as well as the Buenos Ayres Harbour and Docks and in a host of other enterprises he has taken a more or less prominent part.

At one time he was known as Mr. “Imperial” Perks, owing to his leaning in Parliament to the form of Liberalism favoured by Lord Rosebery, in which connection the member for Louth acted as Hon. Treasurer of the Liberal Imperial League.

He has very definite views on the Education question and in the recent contest expressed himself in unmistakable terms upon the reform required at the present juncture of affairs.

On one occasion Mr. Perks was denouncing the prevailing condition of things which prevented boys and girls who has passed with honours from becoming headmasters or mistresses in upwards of 8,000 elementary schools. Mr. Perks then spoke of the Nonconformist ministers who had been flung into gaol, when one of the audience caused considerable interruption by his conduct. “I dare say,” remarked Mr. Perks, “that gentleman knows something about distraint,” whereat there was applause and cheers, and the disturber retired “hurt.”

At another meeting in Louth a critic asked a question of the chairman, to which Mr. Perks replied, “Surely you do not expect our friend to put such an entirely silly question as that.” The meeting thereupon broke into a derisive laughter and the questioner at once collapsed.

Throughout the campaign in January last Mr. Perks spoke with great frankness and admitted freely that during the fourteen years he had represented the constituency he had always endeavoured to say exactly what he thought, without waiting to discover which way public opinion was likely to incline.

Mr. Perks has been criticised because he appealed to his fellow Methodists for help at the Election on the Education and Licensing questions. He defended himself by asserting that these were two of the great moral and social difficulties before the country, and though he did not say “go and preach this doctrine in your pulpits on Sunday,” he had far too much sense to restrict the parson in fulfilling his duties as a citizen on the week days; in his legitimate sphere of work.

Another matter on which Mr. Perks had to fight when contesting Louth in January, was that of the dismissal of two employees from the District Railway during last year, owing to the alteration of the staff, consequent upon the change from steam to electric traction. It was shown, however, that through Mr. Perks’s intervention each of the men received a full year’s salary with interest, and for which they wrote and thanked Mr. Perks. Taken altogether the member for Louth has had to work hard for his victory at the poll and it is to be hoped he may be long spared to represent that division in Parliament.

Methodism has a strong contingent in the House and one of the most outspoken of its members is the sturdy Nonconformist sitting for the Louth division of Lincolnshire.

Robert was born on 24 April 1849 at Hammersmith, London, to parents Rev. George Thomas Perks and Mary. He was educated at Kingswood School, Bath.

Robert was made a baronet in 1908 and retired from Parliament at the 1910 general election.

He married Edith Mewburn (1854-1943) in the spring of 1878 at Banbury, Oxfordshire. Census returns identify five children.

Robert died on 30 November 1934. He was buried in Brookwood Cemetery, Surrey.