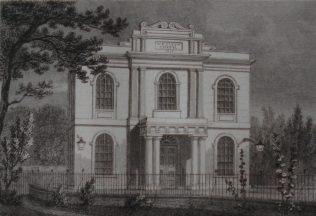 zoom
An etching by James Sargant Storer, published by Sherwood, Neely and Jones of the Welsyan Chapel of 1817. It was replaced in 1877
click to enlarge

William Richard Rogers was the Superintendent Minister of the New Inn Hall Wesley Chapel, Oxford from September 1861 until August 1864. Today this chapel is called “The Wesley Memorial Chapel” and the building dates from the 1870s and is not the original one which William Richard Rogers would have known. The junior minister was Philip B. Wamsley.

I knew that a son, Percy Bertram, had been born on 29th July 1862, to William Richard and his wife Mary Ann. I was interested to see if I could discover any more insights into their lives.
The present Superintendent Minister the Reverend Dr. Martin Wellings has, very kindly, given me many pieces of useful information.

According to “A  History of Wesley Memorial Church, Oxford 1818-1968″ by J.E.Oxley William Richard would have lived in “the Minister’s House which was on the left of the Chapel. The property consisted of a kitchen, back parlour, parlour and study on the ground floor, a cellar below, four upstairs rooms, as well as a pantry and wash-house with a brewing copper. The Chapel-keeper’s house was on the right of the Chapel and had a yard with a stable. Both houses had their own gardens.”

William Richard had a large family so this house must have been full. William Richard had two daughters by his first wife still living at home, a son studying to be a surgeon and six children by his second wife when they arrived in Oxford. His second son became a boarder at Kingswood School in 1863 and his third son went there the following academic year but the space that created was then taken by two new arrivals.

A visit to Oxfordshire History Centre proved to be interesting and informative.

The Circuit Quarterly Meeting Minute Book recorded that at the meeting on 5th September 1861 it was decided that “the stipends of the Ministers be raised to a more consistent and adequate amount”…….”Superintendent to £140p.a. inclusive of all charges except rent and taxes”, “Junior Ministers be increased one guinea per quarter”. (Archive ref. no. – NM5/A/A3/1)
Until Michaelmas Quarter 1861 the Stewards’ Quarterly Account Book showed that a typical quarterly payment was - Quarterly stipend £8-8s-0d, board £10-8s-0d, servant £2-2s-0d, washing £1-1s-0d, stationary £1-1s-0d, travelling 15s-0d coming to a total of £23-15s-0d and rent was £5-0s-0d.

The first time William Richard features in the chapel records was on 22nd September 1861 when he performed his first baptism in Oxford and his last entry was another baptism on 28th August 1864. (Archive ref. no. for Baptismal Records 1812-1873 – NM5/25/R1/1).

Percy Bertram was baptised on 23rd June 1863 by Reverend Benjamin John. In 1863 Reverend Benjamin John was the Superintendent Minister at Witney but they had been colleagues in 1846 when both were Junior Ministers in Wolverhampton, William Richard having just returned from the Antigua District, in the West Indies, a widower with three young children. Benjamin John would also have known the family of William Richard’s second wife who came from the influential Thorneycroft family.

The baptismal records introduced another son, Edward Ernest, who was born in New Inn Hall Street on 13th October 1863 and baptised on 11th January 1864 by the next Superintendent Minister of Witney Chapel, Reverend Richard Ray.

The Circuit Quarterly Meeting Minute Book on 25th March 1862 showed “that the thanks of the meeting be presented to Rev.W.R.Rogers for his services during the past year and that he be invited to …. another year”.

On 25th July 1862 the meeting “Resolved that the trust estates at Coombe and Woodstock be enquired into. Mr.Rogers be respectfully requested to serve new deeds as early as possible.”

On 25th March 1863 showed that the meeting recorded “that the cordial thanks of the meeting be presented to Mr. Rogers for his efficient services during the past year as superintendent of the circuit and that he be respectfully invited to remain a third year”.

Williams final payments were at the end of the Michaelmas Quarter 1864 and were 2/3rd stipend £23-6s-8d and £8-0s-0d for his removal to Haverfordwest.