You are here: HomenextTopicsnextMiscellaneousnextChapel Life, 1907 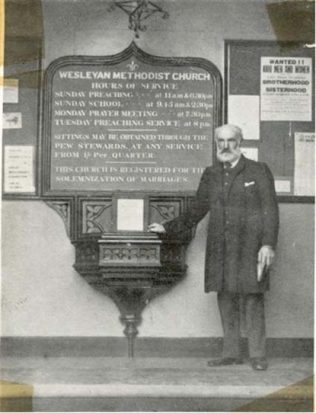 Mr Richard Lamerton, the chapelkeeper of East Street Wesleyan Chapel, Southampton, stands in his frock coat, fixing us with the stern gaze with which, no doubt, he quelled unruly boys in the gallery. The painted board beside him announces the regular Sunday services, morning and evening, the morning and afternoon Sunday School, the Saturday and midweek preaching services. Behind him a printed notice calls for “good men and women” to join the Brotherhood and the Sisterhood. Those good men and women could find all they needed in the fellowship of their church: they could not only take part in prayer meetings and  “the means of grace”, but enjoy lantern shows and concerts, teas and bazaars. There was no need to frequent the music-halls or the public houses, for they could find entertainment as well as exhortation within the walls of their church.

With the development of this chapel culture, came a need to make an effort to reach their neighbours who found that culture strange and irrelevant. The modern church should be an “aggressive church”. Southampton would not get its Central Hall until 1925, but the spirit of the movement, combining evangelistic preaching, social witness, and “brief, bright and brotherly” (or sisterly) activities was alive and well.

It was as well the chapelkeeper’s “cottage” was a short walk across the alleyway from the back of the chapel, at 7 Hanover Place. Mr Lamerton had a great deal to do. A few sheets of paper slipped into a Missionary Committee Minute Book painstakingly list all the activities for a typical week, and they reveal the amount of labour involved in caring for church premises in the days of coal fires and gas lighting.

A year later, in March and April 1908, “Charley Ross, the Celebrated Bookmaker and Tyneside Evangelist,” conducted a Mission, the Stewards considered it “desirable to add a Coal Club to the other Social Departments of Church work”, and Mr George Mason, local artist and church member, ran Lantern Services on the four Tuesday evenings previous to Easter.

Richard Lamerton had been born in Wear Gifford, Devon, 1847, and moved to Southampton in search of work as a shipwright in 1876. He died in 1925, having been a Local Preacher for 50 years. The Circuit Plan, Jan-Mar 1925 said his “revered name stood at the head of the preaching plan…Nothing gave him greater delight than the work he was able to do in connection with Methodism and temperance, and for many years he was one of the stalwarts of the East Street Wesleyan Church, although all the local causes enjoyed his sympathy and support.” He was Chapelkeeper for East Street from 1895 to 1914.

When Mr Lamerton had been appointed as Chapelkeeper, he had still been able to take one or two appointments, sometimes even three or four as a Local Preacher. That was quite a drop from the times when he had been “a very active man, and…walked miles into the district around Southampton in order to fulfil preaching engagements.” Then his own plans, preserved with the Methodist records in the City Archives, show him preaching nearly every Sunday, sometimes twice or even three times: but now they show no marks against his name for quarter after quarter. His time was more and more taken up with all this activity at East Street, and he was making a case for a rise in salary:

We do not know what Mr Lamerton’s salary was in total, or what it had been on appointment. By the time he retired, after 19 years of employment, he was being offered “15/- per week, to include rent for cottage 6/6 payable weekly. All Teas extra.”  (Minutes of the Trustees of East Street Chapel, 2.7.1914. SRO D/METH 9/3)  The chapelkeeper’s fees for attendance at such teas had been set in 1912, and they depended on the numbers present:

The East Street Trustees had their own concerns. They were responsible for the prudent managing of the Church’s budget, and declared that “the ordinary income was not sufficient to meet the expenses absolutely necessary as an aggressive church.” (Minutes, 25.6.1907) To increase income, they agreed that Mr Lamerton should be asked to “endeavour to let sittings to all the new comers he come in contact with, and that he be paid 10% on all such seat holders he introduced in first year’s payment.” (Minutes, 3.1.1907). Pew rents were from 1/- a quarter, as announced on the Chapel notice board. To reduce expenditure, they asked him to turn down the lighting at services during the prayers and the sermon, to save on gas.

Nevertheless, a sub-committee appointed to go into “the matter of the chapelkeeper’s remuneration” proposed to the Trustees’ Meeting that as “it was shown that since his appointment his duties had been considerably added to, owing to the number of meetings having more than doubled, which had necessitated his employing a large amount of extra help for which he had to pay, in order to keep premises clean. It was also realised that this must increase rather than diminish in the future. The Committee therefore felt that the Caretaker was entitled to extra remuneration and recommended for the future an increase of £10 pa to his salary.” (Minutes, 25.6.1907)

The meeting agreed an increase of £5 pa, “to be reconsidered in December”