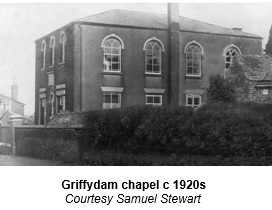 The Lovefeast originated from the meals shared by early Christians where the hungry were also given food. The meals also had two elements which were sacramental and, in time, the two separated  and  became Holy Communion and the Lovefeast. The latter gradually disappeared to be  resurrected in the early part of the 18th century mainly by the Moravians by whom it is still celebrated today.

The Moravians had a strong influence on John Wesley, On the 1736 voyage to Georgia he had been impressed by their deep faith and peace during the dreadful storm and it was in 1743,  while attending a meeting of Moravians in Aldersgate Street London, that he felt his heart “strangely warmed”.  It is unsurprising, therefore, that the Lovefeast became an established feature of Methodism from its very beginnings. It would have been held at Griffydam from the forming of the Methodist society there in the early 1760s and, until the chapel opened in 1778, it would have taken place in in the homes of followers.

It was an annual event held on Easter Monday and the first account of it is found in a letter of 25th April 1821 from William Kidger, a Griffydam class leader, to his daughter and son in law, Mr and Mrs Tucker, which began “I hereby give you an account of our memorable Love Feast. It commenced at two o’ clock and we left the chapel with some difficulty at half past five. Had there been time, I doubt not but that scores, if not hundreds more, would have declared what the Lord had done for them.

From the 1870s onwards, reports on the Griffydam Lovefeasts appeared in local newspapers Throughout the history of the Lovefeast it seems that the format remained largely unchanged. It opened with singing and prayer. The early Christian feast by now was symbolic represented by the passing round of water in the two handled loving cups followed by bread or biscuits, which was overseen by stewards. The remainder of the Lovefeast was taken up in prayer, testimony and song and the atmosphere was highly charged. The essence is well caught by the following account of the 1910 Lovefeast

The service began at 1. 30. and lasted till four o’clock, the chapel being crowded with a large and most enthusiastic congregation, members of whom gave spontaneous testimony to the Christian life, which was given to a running fire of interjected “Praise the Lord”, “Hallelujah”, and expressions of praise and approval. Some speakers……were lively, some were solemn, and some gave sacred songs, but all were obviously filled with great enthusiasm and earnestness. Some gave their testimony with tears running down their faces as they described their rescue from the depths of degradation. After some especially touching testimony, someone would burst out with a hymn, which was heartily taken up by the congregation, the refrain being sometimes repeated several times.

The same report goes on to indicate the hymns sung which are much as would be expected but with surprises.

These included “Amazing Love”, Glory to the bleeding lamb”, when the roll is called up yonder”, “When I get home”, “I need thee”, “When I survey the wondrous cross”, “All hail the power of Jesu’s name” etc.

“The saviour died upon the tree, Glory to the bleeding lamb” and “I shall wear a golden crown when I get home” are barely known today.

The chapel was always full  to overflowing with some 500 there following the chapel’s enlargement in 1862. The opening of the second railway station at Swannington in 1839 later to be followed by the one at Worthington in 1874 allowed those from further afield than the immediate neighbourhood to attend. A 1934 report recounts that “There was a time when special trains brought people from Yorkshire and enthusiasts from other parts of the country attended in large numbers.”

Following the end of the Lovefeast, a public tea was provided in the schoolroom and everyone attended the evening service at 6.00 pm taken by the Superintendent Minister or a guest preacher.

There were frequent conversions. One notable conversion was that of Mary Buck on Easter Monday 1830, who went on to become a celebrated female Primitive Methodist preacher.

By the beginning of the 20th century, the Lovefeast no longer took place in the vast majority of Methodist chapels but the collection for the poor, an important part of the Lovefeast service, became a part of Holy Communion. 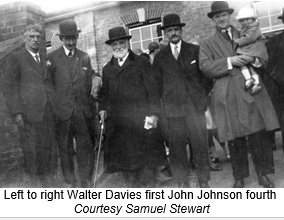 By the 1930s the Griffydam Lovefeast had started to lose its appeal and the chapel was no longer packed on an Easter Monday .but in 1948 was still attracting a congregation of some 300. The last newspaper report was in 1950. While it does not give the number attending, it does mention there being 6 loving cups each 100 years old and  that taking part were  the twin brothers Mr. Walter Davies and Mr. Herbert Davies and Mr. John Johnson, who had attended all Griffydam Lovefeasts for more than 60 years. The latter, Local Preacher and Sunday School Superintendent,  was always the first to be on his feet and speak.

It is not known just exactly when the Griffydam Lovefeast ceased to be held but it was probably the late 1960s early 1970s. Speaking in 2014 the late Sidney Haywood aged 92 recalled that in the later years the service had become much shorter commencing at 2.30 pm and ending at 4.00 pm. By now people had become aware of how germs were spread  and many declined the water. Everyone stopped for the evening service which commenced at 6.00 pm.

So, the Griffydam Lovefeast was continuously held for some 200 years. This has been  surpassed, however, by the Methodist one held on the first Sunday in July in the barn at Alport in the Derbyshire Dales started in the 1760s and still held even last year via Zoom in view of the Covid pandemic.