Thomas Argyle was  born on 25th January 1815 at Heage, Derbyshire, the eldest son of Samuel and Jane Argyle. Samuel was a farmer and miller of Scots descent whose great-grandfather had settled in Derbyshire. Nothing is known of his education but early employment found him working as a clerk in a solicitor’s office in Derby. It was through his work there that he became known to Francis Willington, a Tamworth solicitor,  who offered him employment as his clerk. In 1835, at the age of 20, he commenced his employment with him at a salary of £1 per week, having walked the 45 miles from Heage to Tamworth with an overnight stop in Repton. 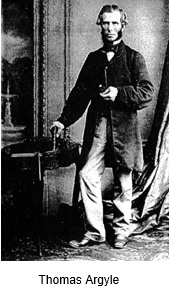 The following year, his considerable ability was recognised in his appointment as Magistrates’ clerk, a position he occupied until his death. It was later confirmed by his appointment as Tamworth’s Town Clerk from 1861 – 1867 and the path taken to become a solicitor. In 1854, he finally persuaded Francis Willington to accept him as an articled clerk and was admitted as a solicitor in 1859. He was taken into partnership and, upon Willington’s death, succeeded to the practice which he carried on as Thos Argyle.

On his arrival in Tamworth he had attached himself to the Wesleyan chapel in Bolebridge Street. This was no doubt because he had Methodist connections already. His namesake was a well known local preacher in the Belper area and the moving spirit behind the building of the first chapel in Kilburne. In 1836. he married his wife, Alice, in Derby who he had met whilst working there. She was a pillar of strength to him and with him devotedly supported the Methodist cause in Tamworth.

He was received on trial as a local preacher in the Burton on Trent Circuit in 1839, his first appointment being at Lullington, a small village some 7 miles to the north of Tamworth. His last appointment was at the Wesleyan Temple in 1897 almost 60 years later. His sermons were described as models of diction, … distinguished for their religious fervour, and their practical advice for both young and old. In his time, in addition to being a local preacher, he was a Sunday school superintendent, a class leader, a trustee, circuit steward and church treasurer.

Although a staunch Wesleyan, he was also ecumenical in his outlook and took an interest in  St Editha’s Parish Church and the other nonconformist denominations including the Bolebridge Street Mission. He also played his full part in the life of the community, such as his support for Tamworth Working Men’s Club and Reading Room. With John Evans, a fellow member and solicitor, Thomas Argyle played his part in the “Penny Readings” which were held at the Town Hall with as many as 500 present. So great were the numbers attending and the enthusiasm, that the local constabulary often had to be present to maintain order! These had been started by Etienne Bruno Hamel and other local businessmen to provide education for the working classes. There would be singing and, as the name suggests, readings-some of a serious nature others not so.

Thomas Argyle died on 9th August 1898 and was interred in Tamworth Cemetery but situated in Victoria Road is a greater memorial to him than any headstone and that is the former Wesleyan Temple opened on 9th April 1878 at a cost of just over £4,000. He provided the site and was the church treasurer. So ably did he handle the finances that, in June 1879, the Minister, Rev’d Ezekiel Burton, was able to announce that the work had been done without any debt being left upon this “House of God for which any interest will ever be payable by the Trustees from their fund”. So appreciative were the members of the efforts of Thomas Argyle that they presented the trustees with an illuminated photograph the inscription to which read Presented as a Memorial of respect to their First Treasurer By the Congregation of the Wesleyan Temple Tamworth to the Trustees September 2nd 1879.

Although the church sadly closed in April 1972, the building still stands. 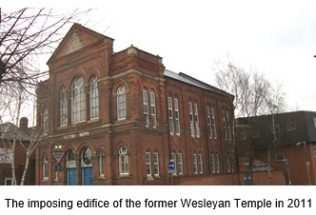