You are here: HomenextPeoplenextThe Wesley FamilynextThe Family of John and Charles Wesley

The Family of John and Charles Wesley 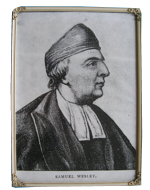 Samuel was educated at Dorchester Grammar School, Newington Green and ExeterCollege, Oxford,[his father’s university]. He matriculated in 1684 and obtained his B.A in 1688 before taking Holy Orders and taking up the curacy of St Botolph’s, Aldgate. Samuel and Susanna were married on 12th November 1688. He was 27 and she was 20.

After a year as a ship’s chaplain, Samuel was appointed Rector of South Ormesby, a small Lincolnshire parish in the patronage of the Marquis of Normanby in 1691. He resigned in 1695 after refusing to allow the mistress of James Saunderson, later Earl of Castleton, to visit his house. He was appointed Rector of the parish of Epworth with Wroot in Lincolnshire in 1695. A very authoritarian Rector, he was unpopular with the people of Epworth who tried to burn down the Rectory on two occasions.

He was not well suited to life in the Isle of Axholme, frequently at odds with his parishioners and rescued from debtors prison only by the personal intervention of Archbishop Sharpe of York.

Samuel was buried in Epworth churchyard on 25th April, 1735. 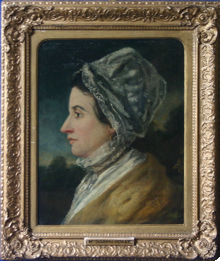 Susanna ANNESLEY was born in London in 1669, daughter of Samuel Annesley of Kenilworth in Warwickshire and later Vicar of St Giles Cripplegate in London and grand daughter of John White who were both strong Nonconformists. She came from a family of 25 children! She met Samuel Wesley at her father’s house in Spital Yard, London, before marrying him in 1688 and converting to the Church of England. She gave birth to 19 children by Samuel between 1690 and 1709, 10 of which survived infancy.

She brought up her children by imposing a strict daily routine.

From birth they were “put into a regular METHOD of living,” At a year old they were taught to fear the rod and to cry softly. They were confined to 3 meals a day and had to eat such things as were provided for the family. At six in the evening after family prayers, they had supper, were washed and put to bed where they were left alone.

Each child began school on his or her fifth birthday. School hours were from 9-12 and 2-5 with no interruptions. All the children learned the alphabet on the first day, apart from 2 of the girls who took a day and a half. No lesson was left until it was perfect. Before the close of morning school each child repeated what had been learned. Before work finished in the afternoon, the whole day’s work was repeated.

The lessons consisted of Maths, Grammar, History and Geography. Samuel taught Classics and Susanna taught Theology. Samuel Wesley, One of Charles’s sons wrote later of his Grandmother, “ She had the happy talent of imbuing a child’s mind with every kind of useful knowledge in such a way as to stamp it indelibly on the memory.”

It is little wonder that the Kitchen in the Old Rectory at Epworth is referred to as “The powerhouse of Methodism.”

In 1712 when Samuel was away in London at Convocation, Susanna felt constrained to invite parishioners into the Rectory for instruction, Counselling and prayer. At that time it was unprecedented for a woman to organise such meetings. The curate complained to Samuel who ordered Susanna to stop holding these meetings. Susanna’s response was that if he forbade her from doing good, he would have to stand with her on judgement day and explain why he had issued this command.

Samuel bowed to her challenge and the meetings resumed. In holding such meetings, Susanna planted a seed in John’s mind which lead to the holding of Methodist Class meetings.

After Samuel’s death she went to live with her daughter Emilia at Gainsborough. She travelled extensively visiting her surviving children and was staying with John at the Foundery in Moorfields in London at the time of her death. She was buried in Bunhill Fields on 1st August, 1742.

Samuel WESLEY Junior was born in Spitalfields, London in February 1690 and educated at WestminsterSchool. He was a High Churchman, poet, classical scholar and teacher. He was Usher at WestminsterSchool for 20 years but because he was a champion of Bishop Atterbury’s cause he failed to get preferment at Westminster became Headmaster of Blundell’s Free School at Tiverton in Devon in 1732.

Samuel married Ursula Berry, daughter of the Vicar of Watton in Norfolk in 1715. He died in Tiverton in 1739. A memorial tablet to 4 of his children can be found in the South Cloister of Westminster Abbey.

Emelia [Emily] was born in South Ormesby in 1693 and was a classical scholar and teacher. She was a Governess twice at Mrs Taylor’s Boarding School before setting up her own school at Gainsborough. After 2 attachments to a Mr Leybourne and a Quaker doctor she married Robert Harper, an unlicensed apothecary of Epworth in 1737 at the age of 44. He left her unsupported and she had to bury a child at her own expense taking all her savings. In her old age she lived with John in London where she died in 1771 aged 79.

Annesley and Jedediah [twins] were born in 1694 in South Ormesby and died there in 1695.

Susanna [Sukey] was born in 1695 in South Ormesby She met Richard Ellison, a gentleman farmer, while staying with her uncle Matthew Wesley, her father’s elder brother, in London and married him despite opposition from the Wesley family. They had 4 children, John, Ann, Deborah and Richard before she left him after a disastrous fire destroyed their house and all their possessions. Sukey refused to go back to him despite his trying various ways of persuading her to return, including notifying her of his death! She died in London in 1764 at the age of 69.

Mary was born in 1696 in South Ormesby. She was born a cripple and stayed at home until she was in her thirties when she married Rev John Whitelamb on 21st December 1733 who became Rector of Wroot at the request of Samuel Wesley, Mary’s father. Mary died at Wroot in childbirth in October 1734 aged 38 and is buried there.

Mehetabel [Hetty] was born in 1697 in Epworth. By the age of 8 she could read the New Testament in Greek with ease and helped her father with his literary work. Later she was sent to Kelstern, near Louth in Lincolnshire to be a governess to break off her attachment to her father’s curate, John Rowley. Soon afterwards she ran away with a lawyer believed to be William Atkins. He called off the marriage arranged for the following day. Hetty returned home in disgrace and hastily married William Wright, a plumber from Louth on 13th October 1725. Her first child, Mehetabel was baptised the following February. Helped by her uncle Matthew, the Wrights moved to London. Although several more children were born and buried, the marriage was not a success. Hetty was disowned by her father, but the rest of her family remained supportive. She became an invalid and died in London in 1751, aged 53.

Anne was born in Epworth in 1702. She married John Lambert, a Land Surveyor on 2nd December 1725 and lived in Hatfield, near Doncaster. Her date of death is not known..

John was born in Epworth in 1703, founder of the Methodist Movement, died in London in 1791.

Infant son born in Epworth in on 8th May 1705, died soon afterwards after being accidently smothered by a nurse.

Martha [Patty] was born in Epworth in 1706 and was said to have a solemn disposition and to have resembled John in looks. She was also sent to Kelstern to be a governess to remove her from John Rowley’s influence. She met Wesley Hall, a clergyman at her Uncle Matthew’s house who had earlier had an attachment to her sister Keziah. She married him in 1735 and they had 10 children, 9 of which died in infancy. Wesley was unfaithful to her and had a child by a servant among many other affairs. John and Charles removed the surviving child, a boy, who died aged 14. Wesley Hall ran away to the West Indies with his mistress where he died. Martha pursued a lively social life in London where she died 4 months after John in 1791.

Charles was born in Epworth in 1707, married Sarah Gwynne by whom he had 7 children. He died in London in 1788.

Keziah was the youngest member of the Wesley family and was born in Epworth in 1709. She was betrothed to Wesley Hall for a short time. After her father’s death she went to stay with Samuel at Tiverton, with financial support from John. Then for a short time she lived with the Halls before John found a position with Rev. Henry Piers, Vicar of Bexley. She died at Bexley in 1741 aged 32.