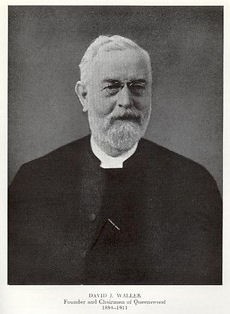 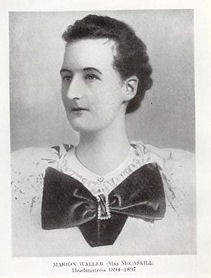 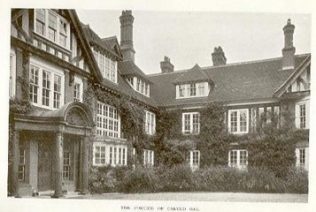 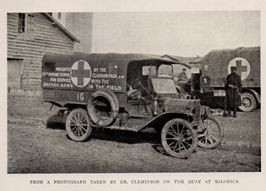 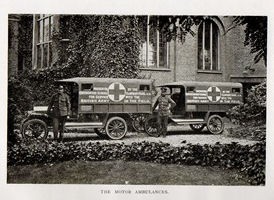 The Educational Home for the Daughters of Wesleyan Ministers opened in Clapham in 1869 then transferred to Clapham Park. It closed in 1893.
When it re-opened as Queenswood School in 1894, with 23 girls, the old headmistress, Miss Healey, was asked to hold the fort until Marion Waller, the daughter of the school’s founder Dr David Waller, took over the post. The Reverend Dr David J Waller was chairman from 1894 to 1911. He was Secretary of the Wesleyan Education Committee and President of the Wesleyan Conference. He died in 1911 at the age of 75. In 1897 Miss Waller became engaged and had to resign her post. She died in childbirth a year later.
Ethel Mary Trew took over and stayed as Headmistress for nearly 50 years. In 1925 Queenswood transferred to its present location at Sheepwell House in Brookmans Park near Potters Bar. Miss Trew reluctantly retired in 1944 and died four years later. A Queenswood teacher, Enid Essame, took over as Headmistress. On Miss Essame’s retirement in 1971 Margaret Ritchie was Headmistress until 1981 when Audrey Butler, an ex-pupil, took up the post. In 1996 Mrs Butler retired and was succeeded by Clarissa Farr, daughter of an Old Queenswoodian and a Queenswood teacher. In 2006 Miss Farr left to become High Mistress of St Paul’s Girl’s School and was succeeded by the present Headmistress Pauline Edgar.

As Queenswood archivist I often receive requests from people asking for information about relatives who had some relationship with the school. One of these was from a man looking for information about his grandfather who had served as an orderly for the Red Cross during the First World War. While studying photographs in the Imperial War Museum he had come across a photograph of a motorised Red Cross ambulance being used at a field hospital in Salonika (Greece) from 1915-18. He was surprised to see it had Queenswood School written on the side. He then discovered that his grandfather lived in Clapham Park before he left for Salonika, so he decided to contact me to find out if I had any records about the Queenswood ambulances. Queenswood girls raised money to buy two Red Cross ambulances during WWI and these served in Egypt and Salonika. I contacted the curator of the Imperial War Museum who had written the book in which the photograph appeared. An expert on Salonika, he has written numerous articles and book chapters on the campaign. I sent him copies of contemporary references to the Queenswood ambulances in the Queenswood Chronicle and he sent me a photograph of one of the ambulances in the field. I also discovered just how many Queenswood girls went to the front to help the soldiers as V.A.D. nurses and in some cases as doctors. This they were encouraged to do by their teachers and families. It was their duty.

They were brave and willing, but unprepared for what they found. Some became ill, particularly from malaria, some died, both of illness and in the fighting. They also saved many lives and offered comfort to the suffering soldiers. Their names are forgotten, but I intend to revive their memory and will be posting their names here.