You are here: HomenextTopicsnextBands of HopenextSheffield: Memories of Attercliffe Road Wesleyan Chapel

Including Band of Hope Queens 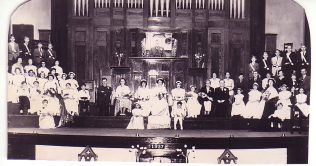 zoom
Attercliffe Road Chapel 1957.1957 - the Queen Miss Snowden is the daughter of the older couple sitting to her left - I believe the girl/woman on her left is her sister but could be wrong, I am next on the left and then the people who I believe are Mr. And Mrs. Snowdon (den)? To the Queens right is an attendant I do not know, the lady to her right is Miss Driver and as you can see there are two more Queens on either side. At the very far left of the Queen right on the end of the photo and second down from the top is Mr. Machin (I have no idea why I remember his name?). BUT I could be wrong and stand to be corrected on any of the names. 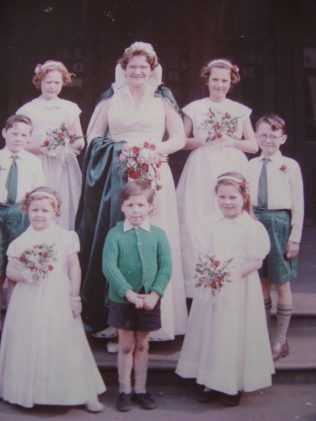 zoom
Not sure of the year, about 1958 ish? Band of Hope Queen, attendant to her right is Jacqueline (Jackie) Parker, boy in front of her is David Johnson (his parents ran a newspaper shop on Worksop Road). To the Queen's right is a girl I cannot remember and in front of and to her left is my brother, Kenneth Sidaway. 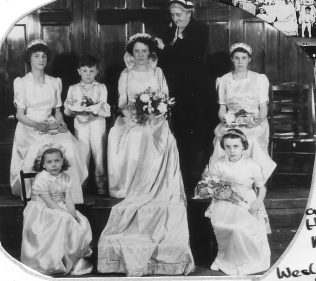 zoom
Attercliffe Road 1957, crowning of the Band of Hope Queen. I am at the bottom left. 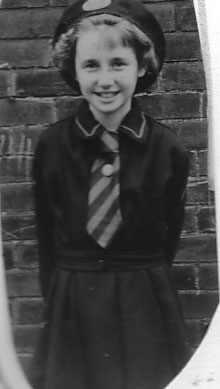 zoom
Me in my Girls Brigade uniform, about 1957 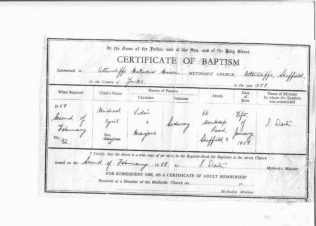 Attercliffe Methodist Hall was on Attercliffe Road, Sheffield and just after the junction with Worksop Road (which is where I was born and lived up to my marriage in 1969).

At the corner of Worksop and Attercliffe Road was Boots the chemist, then progressing up Attercliffe Road towards the city centre was a public house and a doctor’s (Dr. Fogget was one of the doctors and later a Dr. Wallis) then there was an alleyway which bordered on to the church. The front of the church (which seemed to be rarely used) was directly next and after that shops etc.

A Mr and Mrs. Turner used to own the drapers shop on the opposite side of the road and they were involved in the church. They used to be missionaries but I am not sure where, they had a daughter called Joan – does anyone remember them?

I attended from about age 9 in 1956 until about 1960/1 when the church was closed down and moved to one up on Prince of Wales Road in the Manor suburb. I stopped attending for a while but joined again a year or so after.

My younger brother Kenneth also attended and although my youngest brother was actually baptised there the church was closed before he was old enough to attend.

When I think back I realise how important attending not only church services but also the other meetings was and it formed a social life – i.e. Monday evenings was the Band of Hope, Thursday evenings was Girls Brigade and sometimes on Sunday it would be morning service, afternoon Sunday School and as I got older evening services.

Particular memories surround the Harvest Suppers, Whit Sunday walks and Easter celebrations. The crowning of the Sunday School and Band of Hope Queens provided opportunities to travel out of town in some cases – I was an attendant on several occasions, as was my brother. I do remember not only travelling to other suburbs with the Queens but even to Leeds on one occasion.

The Whit walks were the most important time of the year not only because of the church connection but the tradition in the North of England of getting a new set of clothes and ‘showing ‘ the neighbours you new clothes and receiving a penny or similar – Why? Then it would be the walk to the park or recreation grounds for the service and hymn singing – the parading to them with the Boys Brigade carrying the very large banner and the band playing on the way.

I think it was Easter Monday when we had a service and after went to some ‘field’ where races were run and the evening when we would often all purchase ‘fish and chips’ on the way home by way of supper.

The hiking with the Girls Brigade got us out into the surrounding countryside of the Peak District. I also recall all the skills we learnt to ‘earn’ our badges. I can still remember Miss Driver who was our ‘leader’ and the exams we took to test our biblical knowledge etc.

The most outstanding memory is of going on a trip (not sure with which group) to hear Gladys Aylward (who I thought was called Gladys Ailwood for years after) speaking at the Sheffield Town Hall – for one woman to hold so many children enthralled for such a long time was amazing – and she was so small! For a while I wanted to be a missionary, not I must say for my beliefs, but it seemed such a great way to travel!