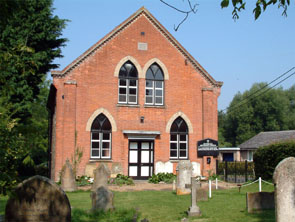 The Christmas 1902 edition of the Methodist Recorder contained an article about the Wesleyan chapel at Botesdale. The correspondent was Rev. Charles Burbridge who had been stationed in the Diss Circuit in 1864-5, forty years earlier. He returned to Botesdale and wrote,

‘The chapel stood alone in one corner of a field and we had to travel two or three hundred yards down a dark and often dirty lane to reach it.  It would seat about two hundred and fifty people.  It was a plain old-fashioned Methodist sanctuary…

A gallery ran round three sides.  It was lighted by candles.  Upstairs the holders were stuck into sockets placed in the back-boards. A row of these lights was placed on the front of the gallery and the snuffers, which were needed to remove the burnt wick, were fastened to the holders by a piece of string and hung down the gallery front. This primitive method of illumination gave rise to some amusing incidents.  Perhaps when one was in the midst of an important part of the sermon, the steward or chapel-keeper would walk up the aisle and then up the pulpit stairs to snuff the lights – a process which was rather disconcerting especially to a nervous young man.  On one occasion, a lady in the front of the gallery lifted up the snuffers to operate on a tall candle and, finding the string too short to reach the flame, she gave it a sudden tug and the whole paraphernalia was lifted out of the socket and fell into the pew below, marvellously hurting no one.

On another occasion, however, things did not end so well.  Someone sitting in front of the gallery snuffed a candle, but the snuffers, being full, did not close sufficiently to extinguish the new tinder.  This continued to burn until the contents of the snuffers were loosened and dropped down, all alight, on the head of a man below.  He soon found out that something was amiss; and the preacher, who had seen what had happened, almost lost his gravity as he saw the man put up his hand and rub vigorously until he obtained relief.’

Charles Burbridge recalled when he had taken services at Botesdale so many years previously. He had found that the four officials at Botesdale Chapel were particularly aged and that

‘In front of the pulpit was a square singing pew and the four men of whom I am speaking each occupied a corner in this prominent place.  There they sat, Sunday after Sunday, looking as though they felt the great responsibility that rested upon them as pillars of the church.’

A Wesleyan congregation had been meeting at Botesdale since 1812 and a chapel was built in 1832.

The destruction of the old chapel

At the Diss Quarterly Meeting of 8 January 1907, the Chairman read a letter reporting that the chapel at Botesdale had been totally destroyed by fire the previous day.  As it was a Sunday, perhaps the candles had finally come into their own.  It was particularly sad as the chapel had recently been very considerably renovated and a schoolroom added at a cost of £200.  However as the building had been insured for £400, not all was lost.

Almost immediately plans were drawn up for a new chapel. Work proceeded at a speedy rate and the new building was completed by 12 October 1907 when the Eastern Daily Press reported the opening service.

‘The new chapel stood on the foundations of the old and remaining portions of wall were incorporated into the building. ‘The front has been built up with red brick with white Gothic arches to the windows and the gable, formed with overhanging moulded bricks.  The roof is constructed of two king-post trusses, the rafters being covered first with boarding, then with vulcanite roofing upon which are the battens and slates, while the interior of the roof is lined with match boarding, varnished. The inside walls are plastered and covered in light green, a darker shade forming a dado around which is a neat stencil.  The seats are of pitch pine varnished with ornamental ends and the rostrum of the same material, while the gallery front is of deal coloured to match the other woodwork.  The building is lighted with four lamps each of 50-candle power and two smaller lamps illuminate the gallery.’

The opening was conducted by the Chairman of the District, Rev. Henry Curnow who took the service.  A public meeting followed when the assembled company was addressed by the other circuit ministers.  The cost of the new church had been £415 of which £217 was received from the insurance company together with £10 from the Connexion’s Twentieth Century Fund. £28 was collected on the opening day.

‘All were loud in their praises of the new building and the satisfactory manner in which the work had been carried out by the builder, Henry Arnold Andrews.’