A Wesleyan chapel was registered in Lombard Street in 1813 by Joshua Kidger. A story is told of how either Joshua’s ostler or his brother John Kidger found a purse of money, which after enquiries and still unclaimed, became the first donation towards the building of the chapel. It is reported as having been opened in 1814 by Dr Adam Clark; and it is of interest that in early days choir and congregation sang to the accompaniment of a string band. 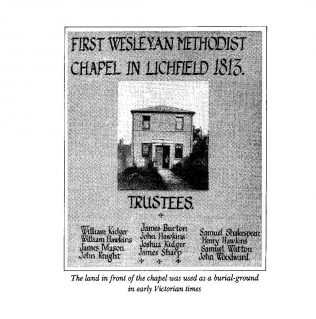 Another Wesleyan chapel is recorded as established in Wade Street c1815, still in use in 1837.
By the early 1820s the chapel had a Sunday School, while ministers from neighbouring circuits served the congregation into the 1840s. On Census Sunday in 1851 attendances were 22 in the morning, with 51 Sunday School children, and 41 in the evening. In winter months the congregation was said to number up to 130. The chapel was part of the Burton-on-Trent Circuit up to 1886.
(extract from a Centenary History of Lichfield Methodist Church 1892-1992.)
This publication can be seen in its entirety at www.tamworthandlichfieldmethodist.org.uk under the headings – Our Churches – Lichfield – LMC Heritage.

The building has been much changed since that time and is currently in use as a Jehovah’s Witness Kingdom Hall. Anecdotally it is reported that the building was sold to the Women’s Institute in 1921 and to the Jehovah’s Witnesses in 1980. It is reported that the land in front of the building was used as a burial ground which was eventually deconsecrated and the burials removed, under the direction of Revd W.N.J. Hutchens – LMC Minister 1972-1980, possibly to Lichfield St Chad Churchyard. 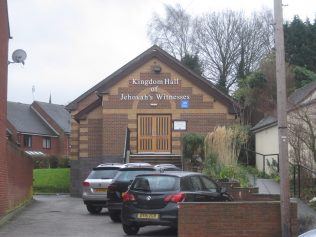