In providing the land in Bolebridge Street, Tamworth for the 1794 chapel, Sir Robert Peel, 1st baronet, had given the Wesleyans some very sound advice.

“My lads, don’t build your chapel too large. People like to go to a little chapel well filled, better than to a large one half full. 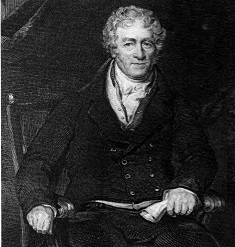 Sir Robert’s advice was certainly heeded. Within some 20 years the original building was not large enough so he was approached again in 1815 and  agreed to grant a Lease dated 26th January 1816 for 999 years at an annual rental of 10s of the existing land plus a further piece at the rear to allow for the demolition of the existing chapel and the building of a larger one. 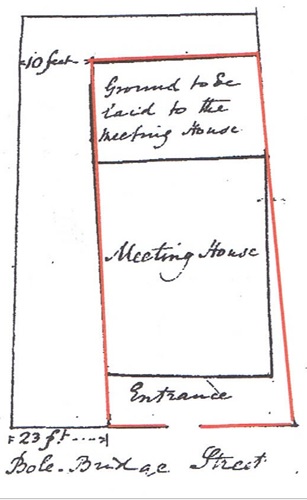 The Lease is interesting in two respects.

Firstly, it provided that preachers were to preach only doctrines contained in Rev John Wesley’s Notes on the New Testament and his first four volumes of sermons.  If a preacher failed to do so or was incompetent then, if a meeting of all preachers, stewards, leaders and trustees found charges of breach or incompetence proved, he was removed.

Secondly, it emphasised the necessity for dealing properly with the Society’s financial affairs by requiring the appointment of a treasurer or steward to receive the seat rents and other income. Such income was to be applied in repayment of monies borrowed for the construction of the chapel, in keeping it in good repair and, once the indebtedness, had been reduced below £100, in support of the preachers. The treasurer or steward was to account to the trustees annually at a general meeting to be held on the first Monday in July.

Because he was a prominent member of the Society, a trustee and a builder by trade it is assumed that Samuel, son of Samuel Watton who, with his wife, had first received Methodist preachers, built the chapel. This may or may not have been the case. Equally, it could have been his brother in law, Thomas Marshall, who was also a builder, or a family effort involving the two of them.

As it was a condition of the lease that the old chapel was demolished and the new one built by 26th January 1818 the trustees wasted no time and by late 1816 the new chapel seating some 360 was ready. It had been constructed at a cost of £712 of which £312 had already been raised. The balance of £400 was obtained by way of mortgage on the premises repayable at the rate of £20 per annum with interest at 5%.

The chapel continued in use until the opening of the Wesleyan Temple in Victoria Road in 1878. It was then used as the Sunday School until the schoolrooms at the Victoria Road chapel were completed in 1898. Thereafter, the building was sold and then variously used as a cycle works, auction room and finally as Woodcock’s printers before finally disappearing along with much of Tamworth’s longest street to make way for a gigantic roundabout known locally as “The Egg”. 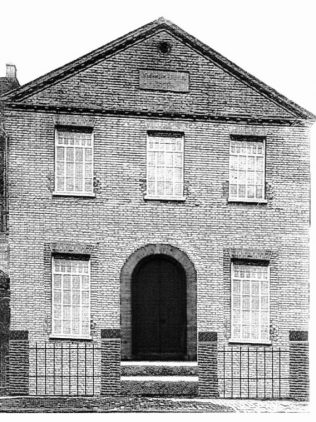 No photographs of the chapel prior to its sale exist but from memories and photographs following its sale, although the forecourt had by then been enclosed, it is possible to establish with a reasonable degree of certainty how the chapel would have looked.