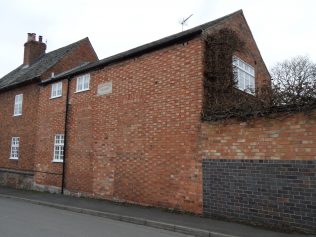 “The first society of Methodists in Thrussington was formed in 1798, worshipping in cottages in Back Lane. In 1829 Storah Graves built the Dissenting Meeting House in Fox Lane, now Regent Street. This became the Wesleyan’s home until the Wesleyan Chapel was built at a cost of £5-9s-6d, in 1839, on land, also in Fox Lane, obtained from Thomas Barsby who owned Holly Tree Farm. It was there they remained until 1968 when financial difficulties due to a dwindling membership and the poor state of the fabric led to the closure. Permission to sell the chapel was obtained from the Methodist Conference on May 10th, 1968 and it was sold back to the then owners of the house now known as ‘The Hollies’.

Heather Larkins comments;- ‘It was a simple chapel with a pulpit and choir seats at one end, the congregation sitting on raked benches beneath which was the store for coke, trestle tables etc…. there was no resident minister, lay preachers from the Melton Circuit coming from villages over a wide area, sometimes by train……”

Reproduced with permission from  Thrussington: A Village Story  – edited by Jennifer Sandys and published by Thrussington Local History Society, 2003