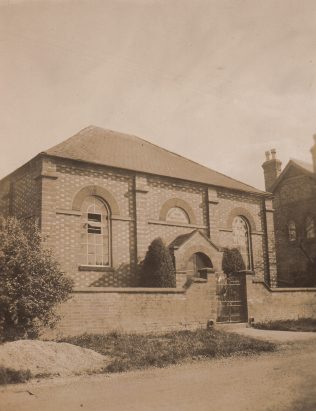 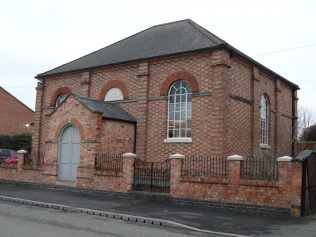 “On a winter’s day of the February of 1849, the auctioneer at a sale of freehold property in Rearsby, Leicestershire, at the Rose and Crown Inn, knocked down Lot 2 to Edward Cook, a tailor of Rearsby, and in doing so played an unknowing part in the realisation of the dreams and prayers of many years. The purchaser had, with £32 raised by public contribution for the purpose, bought the land as a site for a Wesleyan Methodist Chapel.

Within five months of the purchase this poster could be read in Rearsby:-

”The Foundation Stone of the Wesleyan Chapel, Rearsby will be laid at half-past three o’clock on Monday next, July 2nd, 1849 by the Rev. S. Kay (Super of the Leicester Circuit), author of ‘Travels and Researches in Africa’.

The attendance of all interested in this long desired object is respectfully requested”.

Tickets for the Tea Meeting cost one shilling!

Soon after that memorable day, a contract was signed for the erection of a Wesleyan Chapel for the sum of £222 12s Od. Bricks for the building were made in a brickyard opposite. So great was the enthusiasm to build the House of God that the women carried and stacked the bricks while the men dug the foundations.

That the still waters of village life do not always run smooth is evidenced by the fact that, before the roof was on, a dispute arose which was to sever for a time the link between the Chapel and the Wesleyan Connexion. It seems clear that the dispute was connected with the controversy that was raging in Methodism at that time. As a result, feeling in Rearsby ran high and a local preacher from the village was in disgrace with Conference. He and several other Local Preachers were taken off the plan. For some weeks after this, the stewards were embarrassed by the arrival of two preachers to fill one pulpit. One was the displaced but unrepentant Local Preacher, the other the substitute appointed in his place.

Seven years after the Stone laying ceremony, application was made and permission given for the sale of the chapel. In December, 1857, Jonathan Brierley bought the land and the Chapel for £210 and disposed of it to the new trustees for the same amount. For some obscure reason, after a few years the members called themselves ‘Congregationalists’ but the Methodist tradition was always preserved, and in 1882 the Rearsby members asked the Humberstone Road Circuit, Leicester, to supply Local Preachers and were received back into the fold. So it was that the Society returned to the mother church after 25 years. Some opposition came from members who remembered the trouble of 1849, but when once the step had been taken, personal feelings were set aside and all co-operated to ensure the smooth working of the new arrangement.

From that day to this, the work of preaching and witness has gone on. Times have greatly changed. The trend of life has been away from the villages to the big towns and cities. This Society is small now but strives faithfully to continue the work begun here so long ago”.

The Chapel closed in 2003 and was sold and sympathetically renovated, and is now in use as offices, with the garden at the side, once used as an allotment now in use as a car park.