You are here: HomenextChapelsnextLeicestershirenextAcresford Methodist Church 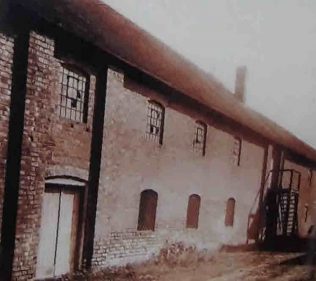 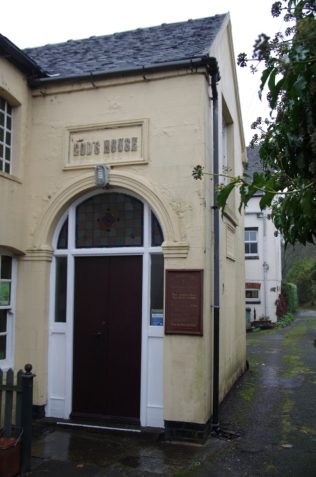 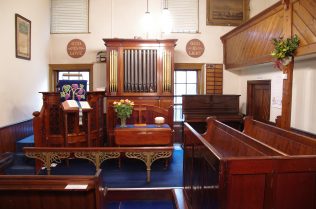 Acresford is a hamlet on the border between Leicestershire and Derbyshire and situated some 6 miles from Ashby de la Zouch and 9 from Burton on Trent. The Methodist Church is in the South Derbyshire Circuit and is highly unusual.

Around 1850, a brewery was built just off the Burton Road in the grounds of Acresford House there. This closed shortly after the turn of the 19th century and in 1909, the disused brewery along with the outbuildings and considerable land was bought by William Gervase Cooper, a staunch Methodist and Local Preacher with an impeccable pedigree being able trace his Wesleyan heritage back to his great great grandfather Thomas Slater who was responsible for the formation of many of the Derbyshire Societies. He converted the former brewery into a corn mill and retail outlet for the sale of fertilizers and animal foodstuffs. The row of outbuildings on the east had been used as stores and maltings and, after allocating two spaces, one for a place of worship and the other for a schoolroom/institute, he converted the remainder of the row on either side into 12 terraced cottages for his workers and a mill office. The place of worship was opened by Rev John Denham from the Woodville and Swadlincote Wesleyan Circuit in 1910 with seating for around 120. While not held on the Model Trusts, it formed a Wesleyan Society within that Circuit.

Initially, the small church was somewhat spartan. There were wooden forms, a reading desk, harmonium and heating stove with lighting provided by oil lamps but in the next few years considerable improvements took place. An organ from Gopsall Hall near Shackerstone was acquired to replace the harmonium, a beautifully carved mahogany pulpit to match the organ was made and money for the communion table and pulpit chair was raised by the Sunday school children. The rudimentary forms were replaced by pews with cushions. Carpets were laid, the vestry constructed and electricity installed. As the balcony ran only along the southern and eastern walls, the large expanse of wall on the northern side was broken up by a gift of large oil paintings of “St Peter”, “The Resurrection” and “St Andrew” which still hang there today. In 1920, the entrance porch was built. “God’s House” was etched above the doorway to emphasise that in the row of houses this one was different and special and etched also on the exterior of the entrance was a plaque remembering not only the fallen but also celebrating the peace which followed it.

Some 20 years after the opening, being acutely aware of the hazards of being in business, William Cooper felt the need to secure the future of the church and discussions were opened with the Wesleyans with a view to it being acquired by them. These were fruitful and, on 15th December 1931, the church was conveyed by him to Rev Alfred Fenton, Superintendent Minister of the Woodville and Swadlincote Circuit, Augustus Cash and other trustees upon the trusts of the Wesleyan Methodist Chapel Model Deed dated the 3rd July, 1832.To raise the necessary funds, a Dutch Bazaar was organized and held in the mill room. Everyone took part and visitors were bused in from 11 places in the area.

While the church, apart from removal of the fire grate and other minor alterations, has altered little in nearly a 100 years the same cannot be said of the immediate area. The mill and yard have gone. Coopers Close, as the immediate area has been appropriately named, is a pleasant cul de sac with detached houses on two sides and the row in which the church and schoolroom stand continues to be known as Brookfield Cottages.

The brewery had been constructed by John Harley Berrey, a Wesleyan Local Preacher and his partner. Acresford Methodist Church then seems to be something of a paradox since, if it had not been for a Wesleyan being heavily involved in the building and running of the brewery there would never have been a Methodist Church in the former stores and maltings. However, it must be remembered that 1850 was before the temperance movement had really gained impetus. This momentum finally caught up with John Berrey around 1867. Realising that being a Methodist and a brewer were now incompatible he sold the brewery, which now belonged to him alone, to one of his travellers and moved to Coalville to become a miller.

As it is located in a row of terraced cottages it is believed to be unique and because of this and its history it has been recognized as a Methodist Heritage Site – one of only two in Leicestershire.

Aside from its historic interest the interior has an exquisite charm and is a place of peace and tranquility where the presence of the Lord is felt.