You are here: HomenextChapelsnextKentnextBromley Farwig Wesleyan Mission and Central Hall

The Farwig Wesleyan Mission was founded in 1881 at the home of Charles and Mary Painter at 12 Mooreland Road. The Mission had sufficiently grown by 1883 to justify building a permanent iron church. This building was further extended and modified over the following 20 years. From about 1900 the Farwig Mission also ran the Great Tent services in Station Road which often attracted congregations in excess of 3000 people. Despite the extensions which could accommodate 600 in the main hall and 300 in the classrooms the Mission outgrew its premises. In April 1905 with the enthusiasm of their first Secretary and Honorary Superintendent, William J Gibbs, a project was launched to build the Central Hall. The Hall itself could seat 1250 and a classroom could hold 400. There were further small rooms and a kitchen. Despite its size other premises were often used for overflow meetings. Central Hall closed in 1975 and was later demolished. – Ed.

From my old Methodist Postcard Album
My favourite mission postcards

These are rare cards 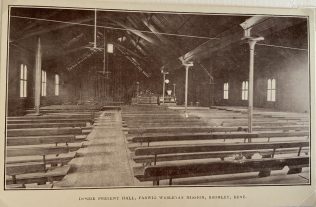 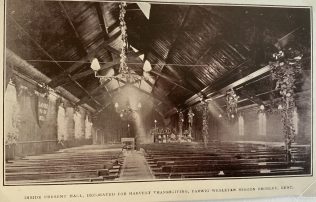 Here is the only Methodist postcard I have of a Methodist church kitchen!! 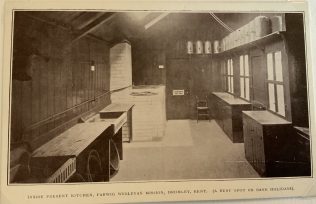 How stark it looks compared with today – the sign on the door says ‘LAVATORY LADIES ONLY’. The card also refers to Bank Holidays which I presume was a time when the church put on meals with some outreach no doubt.
Food and Mission do go well together- hospitality does matter and is a spiritual gift. 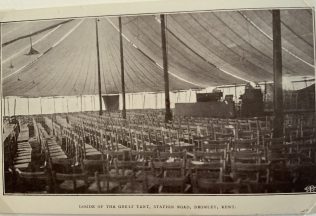 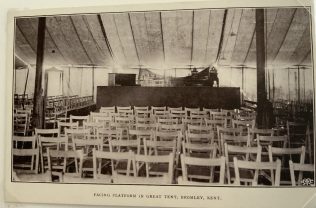 Bromley Central Hall – here is the Entrance hall with posters for the Women’s Own and Missionary Magazine underneath the card showing the Lecture Hall. 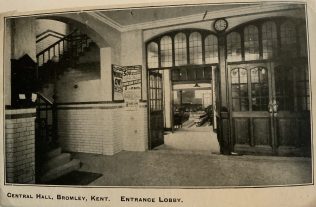 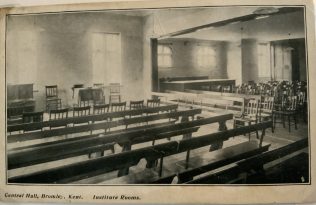 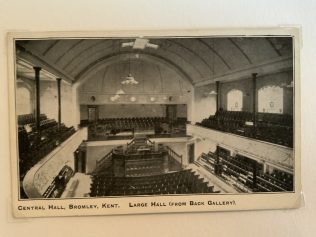 Bromley Wesleyan Central Hall Sunday School what’s interesting here is the dividing partition through the middle of the hall – perhaps boys and girls to be separated.
Also posh architecture and stained glass. 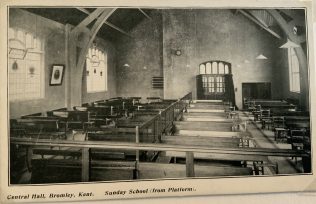 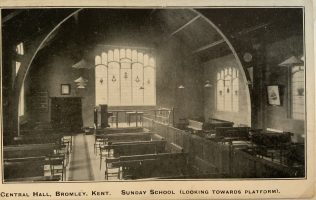 Bromley Central Hall – another one in this amazing series showing the different areas in the mission work. There must have been Army Barracks nearby and so a room was set aside for the Soldiers I suspect about 1914 although I thought these cards were Edwardian- notice the billiard table flags for decoration, potted plants and paper to write home. The counter is where cups of tea and food were served.
(Ed note – I believe this facility was for the numerous injured service men being cared for in Bromley’s VAD hospitals). 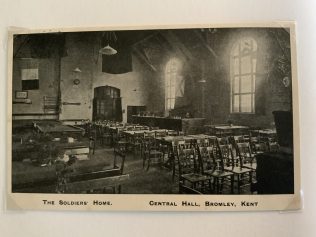